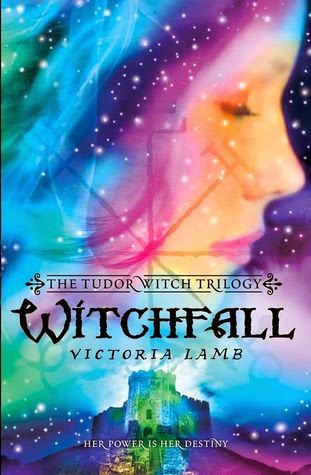 From Goodreads:
If she sink, she be no witch and shall be drowned.

If she float, she be a witch and must be hanged.

Meg Lytton has always known she is different—that she bears a dark and powerful gift. But in 1554 England, in service at Woodstock Palace to the banished Tudor princess Elizabeth, it has never been more dangerous to practise witchcraft. Meg knows she must guard her secret carefully from the many suspicious eyes watching over the princess and her companions. One wrong move could mean her life, and the life of Elizabeth, rightful heir to the English throne.

With witchfinder Marcus Dent determined to have Meg's hand in marriage, and Meg's own family conspiring against the English queen, there isn't a single person Meg can trust. Certainly not the enigmatic young Spanish priest Alejandro de Castillo, despite her undeniable feelings. But when all the world turns against her, Meg must open her heart to a dangerous choice.

The Secret Circle meets The Other Boleyn Girl in Witchstruck, the first book of the magical Tudor Witch trilogy.

From Goodreads:
Her darkest dreams are coming true.

In Tudor England, 1555, Meg Lytton has learned how powerful her magick gift can be. But danger surrounds her and her mistress, the outcast Princess Elizabeth. Nowhere is safe in the court of Elizabeth's fanatical sister, Queen Mary. And as the Spanish Inquisition's merciless priests slowly tighten their grip on the court, Meg's very dreams are disturbed by the ever-vengeful witchfinder Marcus Dent.


Even as Meg tries to use her powers to find guidance, something evil arises, impervious to Meg's spells and hungry to control England's fate. As Meg desperately tries to keep her secret betrothed, the Spanish priest Alejandro de Castillo, out of harm's way, caution wars with their forbidden desire. And with her most powerful enemy poised to strike, Meg's only chance is a heartbreaking sacrifice.

My Review:
I really rather liked these books! I loved the history, being banished, or in the courts, and the magic, and how Meg does learn some new things over the course of these books, and yeah, I know she's going to learn more in the next and last book!

These books had some really great scenes, like the various uses that Meg employed her power for, to help Elizabeth predict the future, seeing how the Queen was just wanting to be pregnant so much that she made her body develop the symptoms of it, in the stars!

Marcus Dent was evil. I mean, wanting to marry her, just because, and then accusing her aunt of being a witch when Meg rejected him, and then making sure her aunt burned to death, and then we find out why he's such a witch hunter-a witch predicted that he'd die at the hands of a witch that could raise a king, which Meg did.

I really didn't like some of Elizabeth's actions. First there was the whole regifting of the King's gift to Meg, and I thought a situation would arise when Meg wore it on a "date" between the King and Elizabeth, but nothing happened, yeah. But then when they went to raise her mom, Elizabeth said that she'd accept the consequences. But then later, when the consequences were that her dad was also brought along, she blamed Meg. Who didn't want to do it in the first place.

And then after all that, when her old nursemaid lady, the one that Elizabeth grew up with, came back, she got rid of Meg to show her power, that Elizabeth couldn't have a suspected witch in her household, Elizabeth just let her go. Even though Meg just had a magical death the night before for Elizabeth. Not cool!

All in all, great books, I utterly enjoyed reading them, and I can't wait to read Witchrise!