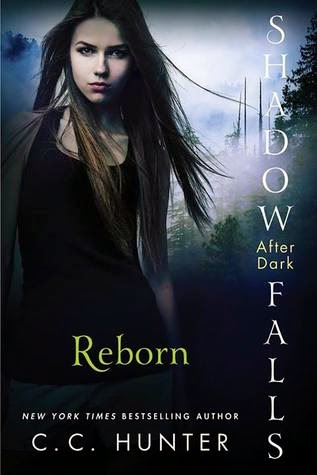 From Goodreads:
Return to the beloved world of Shadow Falls, a camp that teaches supernatural teens to harness their powers—and where a vampire named Della will discover who she’s meant to be.

For Della Tsang, Shadow Falls isn't just a camp: it's home. As a vampire who's never fit in with her human family, it's the one place she can truly be herself. But when a mysterious new guy arrives at camp, Della's whole world is thrown into turmoil. Chase is a vampire with secrets, who knows more than he's telling. But the more time she spends with him, the more she begins to trust this attractive stranger—and feel drawn to him. But romance is the last thing she wants—as she keeps telling Steve, the hunky shapeshifter who won't stop trying to win her heart. And if Della isn't careful, he just might succeed.

When a new case puts everyone she cares about in danger, Della's determined to do everything she can to save them . . . even if it means teaming up with Steve and Chase, who leave her more confused than ever. With their lives on the line, will Della and her friends survive—with their hearts intact?

My Review:
It was so great to read this book! I mean, we get to be in Della's head for the 3rd time, but this time, for a full length book, which yeah! More time in this world, this world that's growing, because we learn more about vampires, even Della, which is the point of the title, Reborn. It's very important to the book!

And she learns that her one aunt was murdered, and her dad was the suspect, which means that it was most likely that her uncle killed her aunt. Which sucks for everyone, since Della was looking for family that knew about her being a vampire, and could accept it.

This book also dealt with her romantic issues, of Steve that she got pretty hot and heavy with in Saved at Sunrise, but then pushed away, again and again. Of Chase, the new vampire, the panty perv, who agitates her, who is very fast, and yeah, that's because's he's a Reborn, a vampire who's gone though the virus stuff twice, and has more power. And Della's a Reborn. So is Burnett.

Burnett and Holiday's baby is born! And Della is the one that deliver's her! And Hannah, named after Holiday's sister, is vampire dominate! And Della saved both Hannah, and Holiday's life. And Della starts to see a ghost, and then yeah, the ghost turns out to be Chan, who died of being Reborn, because not everybody, of the 6 or so of the families that are capable of doing so, survives it. Yeah.

Miranda has a lot of power! When they were at the funeral home that Chan and her uncle used, and it turned out to be a vampire slavery ring, and Miranda just turns them into kangaroos (just like she did to Burnett in Taken at Dusk!) and she did it without thought or preparation, and how the one guy was

This was a pretty spectacular book, and I can't wait to read Eternal!