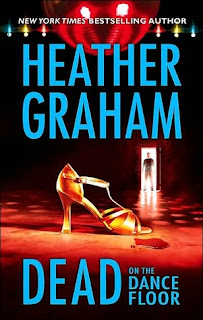 From Goodreads:
Private investigator Quinn O'Casey thinks Lara Trudeau's overdose is a simple case of death by misadventure--until he goes undercover at the Moonlight Sonata dance studio and discovers that everyone who knew the accomplished dancer had good reason to want her dead. Shannon Mackay is equally suspicious of Lara's death--and equally concerned as the deadly events at the studio start to multiply. But she's asked one too many question and now fears someone may be trying to kill her. As the drama of broken hearts, shattered dreams and tangled motives unfolds, only Quinn can stop the killing.

My Review:
This was a really fantastic book! There was a great mystery, and great characters, and all together it made for a pretty great book! It's just kinda sad that there could be that many people who'd want a person dead, though!

Because at one point, pretty much every character that had been introduced, was a suspect. Not one or two at a time, but, like, all of them. That's a lot of people who didn't like Lana, which says something unpleasant about her!

I really enjoyed the relationship between Quinn and Shannon, because it started off a bit funny and sparks fly, and yeah, the sparks never stopped! But they learned more about each other, and that was really great!

This was a really great book, I enjoyed it a lot! Hopefully I'll read more Heather Graham books soon!