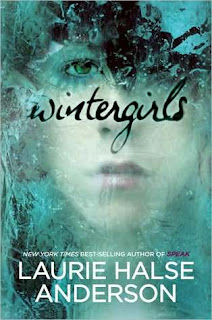 From Goodreads:
"Dead girl walking," the boys say in the halls.
"Tell us your secret," the girls whisper, one toilet to another.
I am that girl.
I am the space between my thighs, daylight shining through.
I am the bones they want, wired on a porcelain frame.

Lia and Cassie were best friends, wintergirls frozen in matchstick bodies. But now Cassie is dead. Lia's mother is busy saving other people's lives. Her father is away on business. Her step-mother is clueless. And the voice inside Lia's head keeps telling her to remain in control, stay strong, lose more, weigh less. If she keeps on going this way—thin, thinner, thinnest—maybe she'll disappear altogether.

My Review:
This book was sad, with the death of a friend who wasn't really a friend anymore, and about food, whether it was throwing it afterwards, or consuming so little, and the whole Wintergirls thing to be the perfect weight of under 80 pounds. And when into the book her mom tells her that her friend died because she binge eater, well, that's a step on her seeing things as they truly are, and on her road to recovery, to deal with the guild that Cassie called her 33 times before she died and Lia didn't answer her phone.

Wintergirls was chaotic, mysterious, and on a tough subject. In this time where teens are constantly judged on how they looked, and bombarded with images of what the rich and famous look like, well, it's no wonder that girls see themselves particularly large and bad, while being painfully thin, and Lia knows a bit about this, seeing herself with over sized limbs, and when her and her therapist did a drawing of herself, and one of how Lia saw herself, she under exaggerated, and when she saw how small she was, she thought that the therapist couldn't see.

This was a really hard book to read, and as Lia progresses on her journey to be smaller and smaller, and stronger, she comes to a critical point, after being harassed by Cassie's ghost, and she decides she doesn't want to die. And that was a really great point of the book. Besides the fact that Eli just left her there by herself, and took her money. That was a douche move.

Wintergirls was a great book to read, and yeah, you should read it!