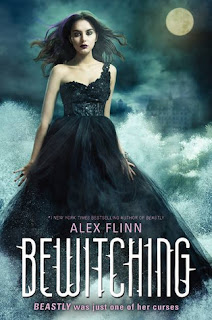 From Goodreads:
Bewitching can be a beast. . . .

Once, I put a curse on a beastly and arrogant high school boy. That one turned out all right. Others didn't.

I go to a new school now—one where no one knows that I should have graduated long ago. I'm not still here because I'm stupid; I just don’t age.

You see, I'm immortal. And I pretty much know everything after hundreds of years—except for when to take my powers and butt out.

I want to help, but things just go awry in ways I could never predict. Like when I tried to free some children from a gingerbread house and ended up being hanged. After I came back from the dead (immortal, remember?), I tried to play matchmaker for a French prince and ended up banished from France forever. And that little mermaid I found in the Titanic lifeboat? I don’t even want to think about it.

Now a girl named Emma needs me. I probably shouldn't get involved, but her gorgeous stepsister is conniving to the core. I think I have just the thing to fix that girl—and it isn't an enchanted pumpkin. Although you never know what will happen when I start . . . bewitching.

My Review:
Oh, I really enjoyed this book! I loved Beastly, and since this stars Kendra, well, of course I had to check it out! And it was really something, I enjoyed it a lot! And I'd love for it to be a series, but it's looking like that's unlikely to happen, which sucks!

So half of this book was Kendra's misadventures, like the French prince, and all that. And I loved these stories, retakes on various fairy tales-I especially liked the changes how Kendra made sure the princess felt the "pea" because it was really funny! That was awesome!

The other half of the story was Emma's story, and her Cinderella-esque situation, and how Kendra first resists the urge to help her, and then gives in. To some pretty great results! Kendra sometimes does the wrong thing, but she always wants the right outcome!

I really enjoyed this book a lot, I'd love a sequel, but unfortunately, it's looking like that won't happen, so oh, well!