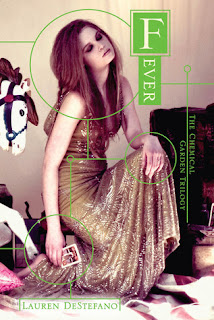 From Goodreads:
Rhine and Gabriel have escaped the mansion, but danger is never far behind.

Running away brings Rhine and Gabriel right into a trap, in the form of a twisted carnival whose ringmistress keeps watch over a menagerie of girls. Just as Rhine uncovers what plans await her, her fortune turns again. With Gabriel at her side, Rhine travels through an environment as grim as the one she left a year ago - surroundings that mirror her own feelings of fear and hopelessness.

The two are determined to get to Manhattan, to relative safety with Rhine's twin brother, Rowan. But the road there is long and perilous - and in a world where young women only live to age twenty and young men die at twenty-five, time is precious. Worse still, they can't seem to elude Rhine's father-in-law, Vaughn, who is determined to bring Rhine back to the mansion...by any means necessary.

My Review:
This was a really good book. It was a bit hard starting in to read it, because Wither ended on a happy note, that they were free, and were heading to Manhattan to Rowan. But it's a book, and a sequel at that, so bad things had to happen, before they have a chance to get better. So when they are captured by ring-mistress, the Madame who was really evil, and who drugs them both, and makes them an act called The Lovebirds, and then tries to sell Rhine to the highest bidder, they run away with Maddie, the daughter of a girl who couldn't make it with them, but who helped them escape, they slowly make their way up the Eastern coast (at least, that'd be the quickest way, from my understanding of US maps.) But trouble is never far behind.

After they make it out, well, things are hard, and Rhine slowly falls ill, from numbness, hallucinations, and almost like a fever, but not really. And while they're at the orphanage, run by Maddie's grandfather, after Rowan burned down their house because he thought Rhine was dead, well, that was a bad thing.

I wished that she could've figured out that she had a tracker in her, that would've made it easier, and I almost thought that it could've been in her ring, because that was something she kept with her, but Vaughn didn't want her to escape, so it was in her leg. So when he brings her back to Florida, and the whole thing where the  blue beans had been pills of what kills all the young people at 20 and 25, kind of like giving people flu shots, so that maybe she'd be immune of it when she reached 20. And then he experiments on her, and it's really bad.

And at the ending, telling Landon all the secrets she's been keeping, like that his child is still alive, and what Vaughn did, and does, well, that didn't go over too well. But Rhine's had a hard time, and there really is no way to tell that news very well. And the whole ending where Rowan was there, on the TV? Well, that means that I really can't wait for the next book!

This book was a really quick read, but it was kinda hard to, what with how in and out of it Rhine was, because of how she cut herself off from the beans, cold turkey, well, it wasn't good for her, and it gave the book the weird haziness on the cover. But I loved it!

It was a really great book, and I can't wait to read the last one!