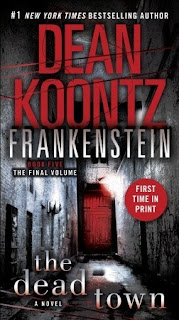 From Goodreads:
Dean Koontz’s enthralling Frankenstein series has redefined the classic legend of infernal ambition and harrowing retribution for a new century and a new age. Now the master of suspense delivers an unforgettable novel that is at once a thrilling adventure in itself and a mesmerizing conclusion to his saga of the modern monsters among us.

The war against humanity is raging. As the small town of Rainbow Falls, Montana, comes under siege, scattered survivors come together to weather the onslaught of the creatures set loose upon the world. As they ready for battle against overwhelming odds, they will learn the full scope of Victor Frankenstein’s nihilistic plan to remake the future—and the terrifying reach of his shadowy, powerful supporters.

Now the good will make their last, best stand. In a climax that will shatter every expectation, their destinies and the fate of humanity hang in the balance.

My Review:
What a great ending to a great series! Well, Victor Immaculate kinda went down too easily, but Deucalion had the power of lightning storms behind him, so Victor didn't stand a chance! I just wish it wasn't that fast!

The fight in Rainbow Falls is escalating, some of the builders are emerging, and some are being burned down, the church people are working with Carson and Michael, and Deucalion first helps the radio station, and then takes the church kids out with his special understanding of the universe. And yeah, Victor just thinks that it's just simple malfunctions, when in fact, he's loosing. He didn't expect that, didn't plan for it, didn't think about it. And that arrogance of his was his downfall.

The builders start making weird things, like a foot with a nose on it, or a hand with a mouth, or they go crazy and eat abotic materials like plastic, and fly all over the place, seeing as they're made of a lot of little bugs! And it was fun to read about those mistakes, those things that went wrong.

Even though there was a lot of death, this was an awesome book, I loved it, so I hope you check out this series!

Author: Dean Koontz
Series: Frankenstein #5
Read: April 9th-10th, 2012
Source: Library
Reason Why: Must finish the series! So good! And it came out on my birthday!
Publisher: Bantam
Published: May 24th 2011