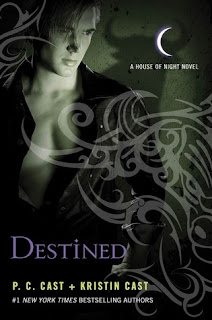 From Goodreads:
Zoey is finally home where she belongs, safe with her Guardian Warrior, Stark, by her side, and preparing to face off against Neferet—which would be a whole lot easier if the High Counsel saw the ex-High Priestess for what she really is. Kalona has released his hold on Rephaim, and, through Nyx's gift of a human form, Rephaim and Stevie Rae are finally able to be together—if he can truly walk the path of the Goddess and stay free of his father's shadow...

But there are new forces at work at the House of Night. An influx of humans, including Lenobia's handsome horse whisperer, threatens their precarious stability. And then there's the mysterious Aurox, a jaw-droppingly gorgeous teen boy who is actually more—or possibly less—than human. Only Neferet knows he was created to be her greatest weapon. But Zoey can sense the part of his soul that remains human, the compassion that wars with his Dark calling. And there's something strangely familiar about him...

Will Neferet's true nature be revealed before she succeeds in silencing them all? And will Zoey be able to touch Aurox's humanity in time to protect him—and everyone—from his own fate? Find out what’s destined in the next thrilling chapter of the House of Night series.

My Review:
Ah, this series. When I read the first one, I didn't know there was going to be 9 books, and still going strong. Well, maybe not as strong in one sense, but in the sense that there's still going to be more books in the series! And I kinda wish that the series was wrapping up, but oh, well.

So with the humans working at the school now, well, it added a few more characters (which makes it even harder to remember them all!) and this book also had more POV's then previous books, so we got to see a few more things!

We know about Heath being the soul in Aurox, to try and help Zoey. It's just a matter of him winning out that his body was created to be a vessel of the bad guys. But Zoey sees a glimpse of Heath, so that's probably going to be something in the next book!

This was a pretty great book, great developments in this world, some sad things, but can't wait for the next book!