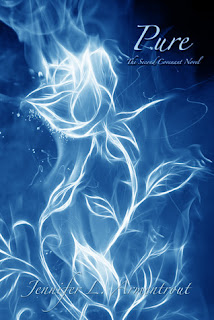 From Goodreads:
There is need. And then there is Fate...

When daimons infiltrate the Covenants and attack students, the gods send furies--lesser gods determined to eradicate any threat to the Covenants and to the gods, and that includes the Apollyon... and Alex. And if that and hordes of aether-sucking monsters didn't blow bad enough, a mysterious threat seems willing to do anything to neutralize Seth, even if that means forcing Alex into servitude... or killing her.

When the gods are involved, some decisions can never, ever be undone.

My Review:
I've developed a theory about Apollyon's, and in this book, it's looking more and more likely that it's true, from the way that Alex's mom's friend was acting in response to questions Alex had. So Pure was a really great book, continuing on the plot of Half-Blood, and I loved it!

Alex and Aiden, well, they don't spend so much time together as Half-Blood, because there's more inner conflict, along with the fulfilment of prophecy given to Caleb, which was really sad, and really bought Alex down, emotionally, and so she has to deal with that, and the whole new rules because of Half-Blood Daimons. And Seth, and how they're connected, and how she knows how he's feeling when it's intense, and he feels the nightmares, and the only way to get rid of them is for him to be there. Which sucks for her.

She and Seth decide that they could have a no strings attachment, and that pool scene was a lot of fun, even though apparently it's going to give her a cold later on. But just reading it, it was hilarious and sad, because I like Alex and Aidan together, not Alex and Seth!

The plot was really well developed, and we got to see mentions of characters and bits of plot mentioned before, and the action what with the Furies just cranked up, and there were plot line started to be continued on, and yeah, I just can't wait to read them!

This was an awesome book, and a quick read, it just commands you to read it, so I hope you guys have a chance to read it, like now!