Week 15 Review: The Future of Us 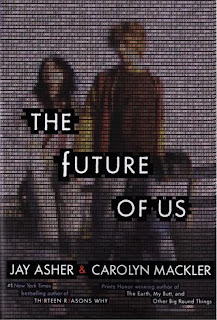 From Goodreads:
It's 1996, and Josh and Emma have been neighbors their whole lives. They've been best friends almost as long - at least, up until last November, when Josh did something that changed everything. Things have been weird between them ever since, but when Josh's family gets a free AOL CD in the mail, his mom makes him bring it over so that Emma can install it on her new computer. When they sign on, they're automatically logged onto their Facebook pages. But Facebook hasn't been invented yet. And they're looking at themselves fifteen years in the future.

By refreshing their pages, they learn that making different decisions now will affect the outcome of their lives later. And as they grapple with the ups and downs of what their futures hold, they're forced to confront what they're doing right - and wrong - in the present.

My Review:
This was a very interesting, fun read! Emma and Josh have no idea what Facebook is, and at one point Emma is very happy that there's a computer in the car, and another point where they wonder over what a text is, well, these are everyday items now, and since I was only 2 in 1996, well, it was really strange and wonderful to read this book!

Emma gets more involved in changing her future, because she doesn't sound happy, and she goes from marriage to this one guy who either hasn't really been seen for 3 days, or uses her money to get a iPad when she could use a therapist, to marriage to this guy with alternating children (because the future is a very changing thing) and when she feels that this guy is bad for her, making her give up her career, she changes the future again, and again, until near the end, Future Emma deletes her Facebook account so 1996 Emma can't log in anymore.

Josh, on the other hand, doesn't do that much to change his future, sure he starts an interaction with the one he's going to marry, Sydney, the girl all the boys at school want to date. And as he spends more time with Sydney, and then arguing with Emma about changing her future, because it affects his, well, there's all sorts of trouble!

But what they realize, is that the future doesn't have to be the thing they have to worry about. It's the present, and what makes them happy, and what doesn't, and where and who they want to be with. So the ending was quite sweet with the 4 1/2 week party being planned. Yep.

This was a really great book, one that I really enjoyed, so I hope you guys check it out!