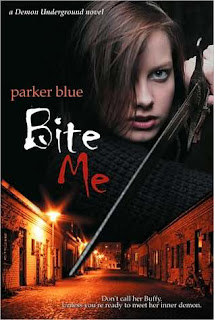 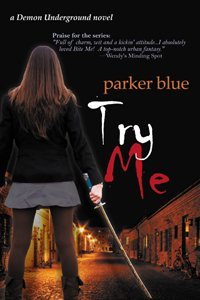 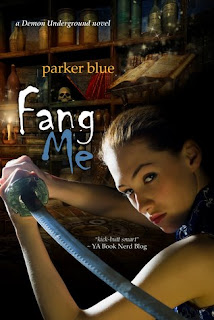 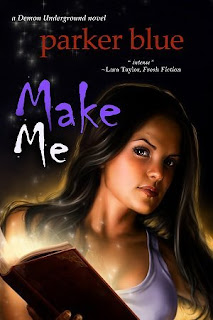 From Goodreads:
Life after high school is tough enough without having to go 15 rounds with your inner demon. Val Shapiro is just your ordinary, part-demon, teenaged vampire hunter with a Texas drawl. And a pet hellhound named Fang. Soon enough she finds herself deep in the underbelly of the city, discovering the secrets of the Demon Underground and fighting to save those she loves. Whether they love her back or not.

From Goodreads:
This part-demon teen vampire fighter and her faithful terrier hellhound are once again patrolling the dark city streets of San Antonio, Texas. Val's hunky human partner, Detective Dan Sullivan, is giving her the cold shoulder since she beheaded his vampire ex-fiance. Vamp leader Alejandro is struggling to keep the peace between vamps, demons and humans. The mucho powerful Encyclopedia Magicka has been stolen, someone in the Demon Underground is poisoning vamps, and Val's inner lust demon, Lola, is getting very restless since Val's now partnered with sexy Shade, the shadow demon with the blond good looks of an angel. The second book in Parker Blue's Demon Underground urban fantasy series plunges readers deeper into a heady world of passion, friendship, intrigue and mystery.

From Goodreads:
The vampires want it. The demons want it, too. And someone is willing to kill Val for it.

Val and Fang have to find the powerful Encyclopedia Magicka before either of San Antonio's warring underworld factions locate it or the consequences will be deadly for the entire city. As usual, Val's vampire enemies (they still call her The Slayer) want her dead. Even some of her fellow demons may be less than trustworthy, since they'd like to grab the legendary book of spells before she does. Val has a personal claim to the Encyclopedia--her demon father left it to her when he died--but someone stole it recently. And that can't be good.

Battling vamps and dodging demons, Val struggles to unravel the mystery and find the thief. At the same time, she's fighting her attraction to sweet, sexy Shade--her favorite shadow demon. Rumor has it that Val will lose her part-demon, vampire-fighting powers if she gives herself to him.

With a crowd of vamps and demons out to trick her or kill her, it's not a good time for her to risk her job as the city's best vampire hunter by falling in love. The stakes are high and aimed right at her heart. But Lola, Val's hungry little lust demon, doesn't like being denied. Will Lola finally get her way?

What's a part-lust-demon-teen supposed to do? Whatever it takes.

From Goodreads:
Shapiro has a secret she's desperate to keep—she's lost her slayer powers. As the new guardian of the Encyclopedia Magicka, Val expected the books to give her powers to replace those that disappeared after she lost her "V card" to Shade. But the encyclopedia exacts a price for every spell, making the job of guardian a tricky proposition.

When a rogue demon kidnaps Val’s roommate Gwen and Micah, leader of the San Antonio Demon Underground, Val is plunged into the middle of a Solomon's Choice. The rogue wants the dangerously potent Encyclopedia Magicka in exchange for her friends' lives; the succubus leader of the Demon Underground in Austin is demanding the books be destroyed rather than let them fall into the wrong hands and wants Shade for herself, swearing to do everything she can to prevent Val's turning over the books.

The kidnapping isn't the only crisis Val faces. She's been betrayed by Fang. Demons and vampires are disappearing. The vamps of the New Blood Movement are forcing Val to keep the terms of her agreement to work for them to combat this new threat.

The Demon Underground is challenging Micah's leadership, and everyone is depending on a now-powerless Val to set things right. Val needs all the help she can get. Even if it means forgiving Fang and spending time with a dangerously sexy cowboy-vampire.

My Review:
This was a fantastic series! I just had to keep reading them! I loved being in this world, I loved Parker Blue's writing, and these characters are just amazing! I loved every word, and since this didn't feel like the end of the series, I want more!

Val was such an awesome character! And so were the others! I loved that she named her succubus side Lola, and then used Lola's strength to fight vampires. And then things get complicated, with each subsequent book! I loved it!

This world, it's got demons and vampires, and magic, and betrayal. And the Encyclopedia Magicka, well, that is a pretty important piece to own! And seeing what it causes, well, yeah, it complicates Val's life, more then it should!

I just loved reading these books, and I can't wait for more, and I want more! So good!