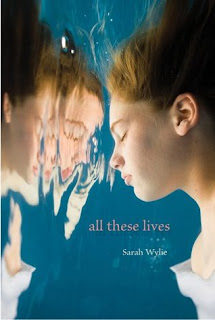 All These Lives by Sarah Wylie
Expected Publication: June 5th 2012
From Goodreads:

Sixteen-year-old Dani is convinced she has nine lives. As a child she twice walked away from situations where she should have died. But Dani’s twin, Jena, isn’t so lucky. She has cancer and might not even be able to keep her one life. Dani’s father is in denial. Her mother is trying to hold it together and prove everything’s normal. And Jena is wasting away.

To cope, Dani sets out to rid herself of all her extra lives. Maybe they’ll be released into the universe and someone who wants to live more than she does will get one. Someone like Jena. But just when Dani finds herself at the breaking point, she’s faced with a startling realization. Maybe she doesn’t have nine lives after all. Maybe she really only ever had one.

I have this as a NetGalley ARC, and I've read it, and it's so good! Can't wait for it to come out! What about you guys? Happy reading!
Posted by Louisa @ Words I Write Crazy at 6:00 AM