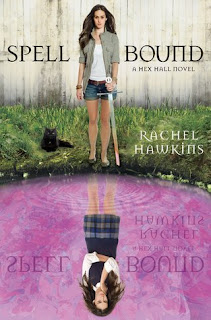 From Goodreads:
Hailed as "impossible to put down," the Hex Hall series has both critics and teens cheering. With a winning combination of romance, action, magic and humor, this third volume will leave readers enchanted.

Just as Sophie Mercer has come to accept her extraordinary magical powers as a demon, the Prodigium Council strips them away. Now Sophie is defenseless, alone, and at the mercy of her sworn enemies—the Brannicks, a family of warrior women who hunt down the Prodigium. Or at least that's what Sophie thinks, until she makes a surprising discovery. The Brannicks know an epic war is coming, and they believe Sophie is the only one powerful enough to stop the world from ending. But without her magic, Sophie isn't as confident.

Sophie's bound for one hell of a ride—can she get her powers back before it's too late?

My Review:
Oh, this was a hilarious book! And really sad, with the deaths, but they were deaths that were given so the bad guy could be caught. Sophie humor throughout the book was amazing, like her name when she finds out her mom is a Brannick, which is the surprising discovery mentioned.Oh, and that it wasn't the Brannicks or the The Eye who attacked as Sophie and the others thought, but the Casnoff's demons. And yeah, this was just so good!

Spell Bound takes place about 3 weeks after Demonglass, because Sophie was stuck-though it felt like a normal trip-but it had to figure out what she was, because she wasn't really a demon without her magic, but she wasn't human, either. And when she arrives at the Brannick's headquarters, looking for her mom, she is in for a shock when it turns out that her mom is a Brannick. And then her dad and Cal show up. And then she's pulled away, back to Hex Hall, but it really isn't Hex Hall anymore, the lights are dim, the mirror is broken, there's a strange fog that won't let any of them leave, and no one can use magic, unless the Casnoff's let them. And Archer is used as a dummy for the students magic. So things are looking pretty bad.

But when she decides to get her powers back, even though there's a chance that the Casnoff's could command her, well, she fights it, and the go to hell and back, and yeah. There's the big fight, with Archer doing some things that cause him to be put on a hit list of the Eye's.

And the ending? Quite sweet, and nice, and well, just really good, though sad, but Cal and Eloise could be together, and they'd make a good couple!

This was a great book, so I hope you guys will check out the series! And I can't wait to read whatever Rachel Hawkins writes next!