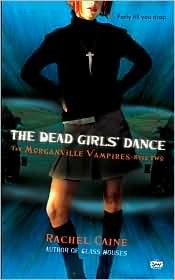 From Goodreads:
Claire Danvers has her share of challenges--like being a genius in a school that favors beauty over brains, homicidal girls in her dorm, and finding out that her college town is overrun with the living dead. When a local fraternity throws the Dead Girls' Dance, hell really breaks loose.

My Review:
Well, this book just picked up right after Glass Houses, what with Michael being killed by Shane's Dad, at least, that's what he thinks! But you can't kill a ghost, in his house that protects him. And the bikers are sent away because of an intruder alert, and the action just ramps up with Shane being accused of killing a vampire is to be put to death in 2 days. Thus, an action packed, addicting book! I read it in about 2 hours. Plus it was pretty short.

The whole Dead Girls Dance, well, it was a minor part of the plot, just a dance where Monica
recruited a few guys to date rape Claire, basically, and to get Sam, Michael's grandfather, and the youngest vampire around until Michael is turned a bit later.

And the kidnapping, first by Monica and her gang, then Monica and Clare by Shane's dad, and the whole trade, going into burning buildings, going into a building filled with explosives, well, Clare goes a long way to get Shane free, especially when it wasn't him who killed the vampire, it was Shane's dad, and he was working with Oliver. Yep. I just wanted to tell them to arrest Oliver for the murder of Michael, technically, so for once the humans would be the acknowledged victims, and thus the jury who would commit Oliver to death. Yep.

This was an awesome, action packed novel, I just loved it, now to read more of the series!