Week 16 Review: Shadows on the Moon 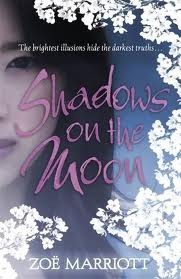 From Goodreads:
"On my fourteenth birthday when the sakura was in full bloom, the men came to kill us. We saw them come, Aimi and me. We were excited, because we did not know how to be frightened. We had never seen soldiers before."

Suzume is a shadow-weaver. She can create mantles of darkness and light, walk unseen in the middle of the day, change her face. She can be anyone she wants to be. Except herself.

Suzume died officially the day the Prince's men accused her father of treason. Now even she is no longer sure of her true identity.

Is she the girl of noble birth living under the tyranny of her mother’s new husband, Lord Terayama? A lowly drudge scraping a living in the ashes of Terayama’s kitchens? Or Yue, the most beautiful courtesan in the Moonlit Lands?

Everyone knows Yue is destined to capture the heart of a prince. Only she knows that she is determined to use his power to destroy Terayama.

And nothing will stop her. Not even love.

My Review:
This was a instantly captivating book! Suzume is a wild child, in a place where polite refinery is basically a must. So she's berated, and her only friend was her cousin-sister, Aimi. And when the soldiers come, they don't know that anything's wrong, but when her father is about to be killed, she speaks out, and Aimi pulled her away and they ran.

Being the lone survivor, when her mom and a friend of her dad's come back, there's something different about Suzume. She's gone through this horrible event, and she's not allowed to talk about it.And from there her situation deteriorates from bad to worse, making mistakes and fleeing for her life.

The description almost makes it seem like she goes between the 3 roles at one time, but it's a slow progression of being Suzume, to the drudge, to Yue.  She changes and grows throughout her journey, and her hardships, until 1 thing is on her mind. Vengeance. And she goes after this with a will that is unparalleled, she doesn't let anything get in her way. Except that she fell in love.

The plot in this book was compelling, Suzume doesn't make the best choices, she's in bad situations, and she's suffered a loss, and it's compounded by the actions of others. And so she breaks her heart to get her wish.

Shadows on the Moon was an awesome, amazing, wonderful, earth-shattering book! I just had to keep reading it, even though it was causing physical pain (see My Pillow Hates Me post.) Yep. So just read this book already!