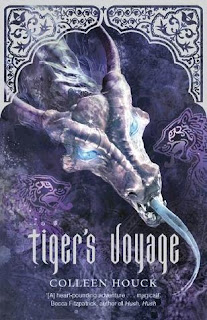 From Goodreads:
In the third installment of the Tiger series, Kelsey Hayes pushes through the pain of lost love and strengthens her friendship with Kishan. Despite his strong feelings for her, Kishan has agreed to be her ally in helping her reunite with the man she still loves. Together, they seek to help Ren regain his memory and begin the search for the third magical gift—an object of power that will help break the curse that causes them to live part of their lives as tigers.

They board a luxury yacht and seek Durga's aid once again, who supplies them with her golden weapons. With Nilima, Mr. Kadam, Ren, and Kishan at her side, she soon learns that the task ahead will be even more difficult than the others. Confronting a dark magician, multiple dragons, and terrifying denizens of the deep seems easy when compared to facing the daunting task of stitching up her heart. Just when she thinks she's ready to set her feet on a new path, she is yanked back with a jolt to the one she's determined to leave behind.

The jarring tug-of-war that ensues for Kelsey's heart leaves her anxious and confused. Combined with the stress of almost being killed every other day, it would appear that saving the tigers is almost more than she can handle. Still, she presses on, knowing that a choice is looming on the horizon. One she cannot put off making for long.

My Review:
While this is a big honking book at 543 pages, at least, the copy that I read, I just flew through this book! The plot was more complex then before, with multiple parts to getting to the 3rd object, with the 5 dragons, there were little breaks between the dragons while in the first book was just facing all the challenges back to back, and quickly, because it was only the first one, and the second one not too much more, just 4 rooms in the tree, while this one had the 5 dragons, then the whole big shark at the end. Yep.

Kelsey is having a hard time being around Ren and having him not remember anything about the 2 of them, until they decide to be friends and just go from there, and as they develop a new relationship, and feelings similar to the old ones develop, the kindness, steadfastness, and patience of Kishan, the whole thing with the bimbo whom no one on the ship liked, and how aggravating she was, in how she treated everyone, and her worldview that she could have either of the brothers if she wanted to.

The whole Ren not remembering Kelsey, and that he did it to himself, well, I guessed that it was what Durga did to protect them both, I mean, Ren tried to tell her that it was going to be hard, and that before he'd been talking about his memories of her, and that Lokesh was trying to find her (because apparently he wants to sire a son with her, because 1. she's like the tiger's mom, who Lokesh wanted too, and 2. it'd be taking from the tiger's and the tiger's father even if he is dead, and it would hurt them. Because he's evil, and does things like that.

When she realizes that her heart will always be connected to Ren's, but that he will always be the one to rush into situations, to save everyone, she chooses Kishan, a safe bet, unlike Ren, he doesn't put himself in the dangerous situations. And while Ren doesn't like that, his tiger side says she's his mate, and that he loves her, and yeah, that's going to be some source of conflict in the next book!

The ending, with the whole fighting Lokesh, and Mr. Kadam and his great to the nth degree granddaughter disappear, and Kelsey is kidnapped, well, that was explosive! And what a cliffhanger! I can't wait to read the next book! It needs to come out, like, now!!

This was a great, great book, and I can't wait to read the next one!