Week 32 Review: Demon from the Dark 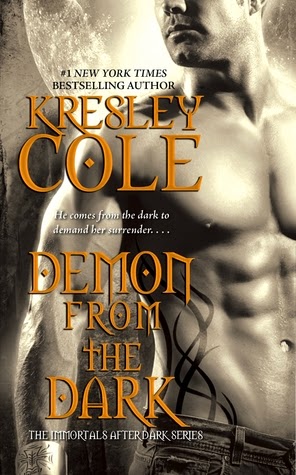 From Goodreads:
From New York Times bestselling author Kresley Cole comes this scorching tale of a demon outcast poisoned with vampire blood and the vulnerable young witch he vows to protect, even from himself.

A DANGEROUS DEMON SHE CAN'T RESIST . . .

Malkom Slaine: tormented by his sordid past and racked by vampiric hungers, he's pushed to the brink by the green-eyed beauty under his guard.

A MADDENING WITCH HE ACHES TO CLAIM . . .

Carrow Graie: hiding her own sorrows, she lives only for the next party or prank. Until she meets a tortured warrior worth saving.

TRAPPED TOGETHER IN A SAVAGE PRISON . . .

In order for Malkom and Carrow to survive, he must unleash both the demon and vampire inside him. When Malkom becomes the nightmare his own people feared, will he lose the woman he craves body and soul?

My Review:
This was an amazing book! I thought that it would be a bit hard to read like Last Kiss Goodnight, which also had captivity, but since the beginning 200 or so pages they were in his demon realm, it was OK, and then they broke out pretty quickly afterwards, that was OK!

Yeah, lots happens in this book, for example, the evil that Lothaire stole from, that Lucia and Garreth lead him to, came around, and yeah, she's the Queen of Gold and Evil, which is a double whammy, and why they were able to escape.

So Malkom's had a pretty hard life. Born to a prostitute in a very medieval world, where there was hardly any water, and then was sold to be a vampire's blood/rape slave when he was 6 by his mom, and then was abandoned when he was 12, which lead to him killing his former master, and then other vampires. Which lead to the prince to get him to join the army, make friends with the prince, be betrayed, and turned into a vemon, and having to kill his only friend to keep his friend from killing him. Yeah.

I really enjoyed them together, they were so close before the whole taking him over to the order, who are utterly evil! And yeah, how she betrays him, but for Ruby, who's only 7, and how long it takes for him to regain his trust in her.

Yeah, this book was amazing, and it sets up for the next book, what with a lot of the lore creatures going to go to the island to find those that had been captured, and how Chase is Aidan, the love of Regin's love, so I can't wait for Dreams of a Dark Warrior!