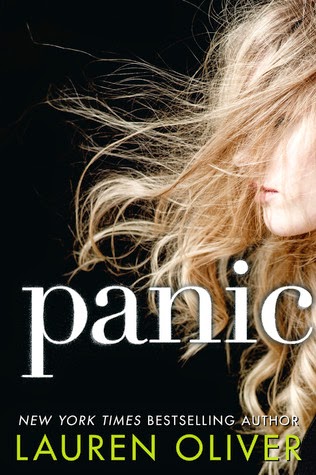 From Goodreads:
Panic began as so many things do in Carp, a dead-end town of 12,000 people in the middle of nowhere: because it was summer, and there was nothing else to do.

Heather never thought she would compete in Panic, a legendary game played by graduating seniors, where the stakes are high and the payoff is even higher. She'd never thought of herself as fearless, the kind of person who would fight to stand out. But when she finds something, and someone, to fight for, she will discover that she is braver than she ever thought.

Dodge has never been afraid of Panic. His secret will fuel him, and get him all the way through the game, he's sure of it. But what he doesn't know is that he's not the only one with a secret. Everyone has something to play for.

For Heather and Dodge, the game will bring new alliances, unexpected revelations, and the possibility of first love for each of them—and the knowledge that sometimes the very things we fear are those we need the most.

My Review:
This was a pretty amazing book! Very realistic, dealing with a game that is pretty much all the entertainment that this small town has for teens, because teens are the ones who are competing in it! And yeah, the whole game is crazy, and the name is very suggestive in what it's about!

I really enjoyed these characters, how they see themselves, like Heather after her boyfriend dumps her, has a pretty negative look about herself, while about halfway through, Dodge thinks that she's had her beauty come out, being polished, by the game.

And yeah, then there's Natalie and Bishop who round out the original group of 3 that Dodge later joined. Natalie was also participating in Panic, and yeah, I didn't like her. She made a deal with Heather that if either one of them won, then they'd split it with the other, but then she went and made another with Dodge, one that she wasn't planning on honouring. Oh, and at her birthday, she kissed Dodge, even though she kinda had a boyfriend. And Bishop, who has a connection to the game. Oh, that he's a judge, which he did for Heather!

I liked how it ended, that there were consequences for their actions, and that they were using the money for some good things, that helped heal the damage that happened. Though I don't think Bishop should've lost the money from being a judge, because a) he'd already done all that work, and b) he didn't mention Panic.

Yeah, this was a pretty fantastic book, I certainly enjoyed it!