Week 32 Review: The Heart of Christmas 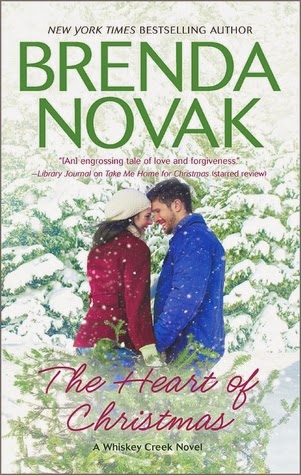 From Goodreads:
Just call her Christmas Eve…
Eve Harmon has always enjoyed Christmas, but this year it reminds her of everything she doesn't have. Almost all her friends are married now, and that's what Eve wants, too. Love. A husband and kids of her own. But the B and B she manages, and even Whiskey Creek, the small Gold Country town where she was born and raised, suddenly seem…confining.

Eve's worried that her future will simply be a reflection of her past. There's no one in the area she could even imagine as a husband-until a handsome stranger comes to town. Eve's definitely attracted to him, and he seems to have the same reaction to her. But his darkly mysterious past could ruin Eve's happily ever after-just when it finally seems within reach. And just when she's counting on the best Christmas of her life!

My Review:
What a great book! Being the 7th in the series, we have a lot of established characters-but this one brings in one from Brenda's previous series, Bulletproof, which was connected to her Dept. 6 Hired Guns series, so yeah, that's 3 together, and I'll have to reread her other 2 series to see if they connect, too!

Loved who the hero was, and we got to learn more about him, and yeah, glad that I read this so close to the Bulletproof series, because now that they're linked, a more enriched reading! And yeah, bad things happen, but good things happen, too!

I loved the one scene, with Eve and her parents, and she told them about sleeping with him, while she was still thinking of it as a one night stand, and how supportive they were, and how hard on herself Eve was, because she has such high expectations of herself! Loved it!

Loved getting Eve's story, she's been alone almost the whole time (besides her thing with Ted Dixon) and she's the only one of the whole original group who is/well, after this book, was, single, and yeah, while there are still people in the town that are single, they aren't totally part of the gang, so there may or may not  be an 8th or more book in the series. So yeah, that's a bit of good thing, and a bad thing, because I love Brenda Novak's mystery books, and we haven't gotten another one in the Whiskey Creek series (it's come close, but not all the way) but I'm enjoying this series. So yeah.

Loved this book, and yeah, still conflicted on having another sequel, but this was an awesome book!