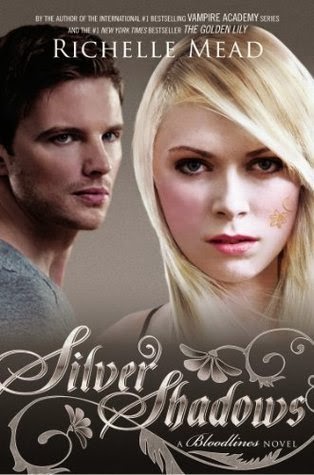 From Goodreads:
Sydney Sage is an Alchemist, one of a group of humans who dabble in magic and serve to bridge the worlds of humans and vampires. They protect vampire secrets—and human lives.

In The Fiery Heart, Sydney risked everything to follow her gut, walking a dangerous line to keep her feelings hidden from the Alchemists.

Now in the aftermath of an event that ripped their world apart, Sydney and Adrian struggle to pick up the pieces and find their way back to each other. But first, they have to survive.

For Sydney, trapped and surrounded by adversaries, life becomes a daily struggle to hold on to her identity and the memories of those she loves. Meanwhile, Adrian clings to hope in the face of those who tell him Sydney is a lost cause, but the battle proves daunting as old demons and new temptations begin to seize hold of him. . . .

Their worst fears now a chilling reality, Sydney and Adrian face their darkest hour in this heart-pounding fifth installment in the New York Times bestselling Bloodlines series, where all bets are off.

My Review:
Oh, my, this was a spectacular book! Hard to read, but yet, hard to put down, I started this book around 12 am, and then finished it by 2:30, even though I had to be up early at 7:30 and I need 8 hours of sleep to not be tired. That was how much I needed to read this book, and I don't regret the loss of sleep because it meant that I got to read this book!

Of course, this is, so far, the hardest book to read in this series, because it's what's been feared since book one, in more then one way. The major one, for the majority of the book, is that Sydney's been sent to re-education, which involved sleep deprivation, starvation, torture, and mind games, to brainwash and control them.

With Adrian and Sydney separated, Adrian slips into some old bad habits, including pretty much non-stop partying with alcohol, and that just makes their first spirit dream after that so much more poignant, and wonderful! And then their reunion! So proving that the center can hold!

They get married! I absolutely loved that, that they were doing it because they are genuinely in love with each other, as well as it's going to protect the both of them. His proposal was so sweet, and how he kind of put himself down, and then the arrangements that he made, from the cuff links being made into the rings, her changing her wedding shoes with blue running shoes. That was just great!

I mentioned earlier that it has multiple fears realized in this book. The other one, about Jill, the whole reason why they were in California in the first place-came true. She's now missing, and the vote for it to be OK for Lissa rule without another family member, hasn't gone through yet, so Lissa could lose her crown. Which sucks. And now they have to find Jill, because hey, she's awesome, and  all the political reasons why besides the emotional ones, too!

It's going to be a hellish wait for February for The Ruby Circle! Because this was just such a great, wonderful book!