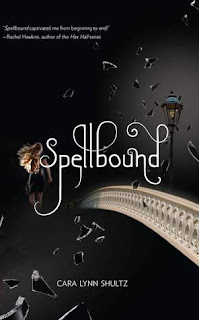 From Goodreads:
What's a girl to do when meeting The One means she's cursed to die a horrible death?

Life hasn't been easy on sixteen-year-old Emma Connor, so a new start in New York may be just the change she needs. But the posh Upper East Side prep school she has to attend? Not so much. Friendly faces are few and far between, except for one that she's irresistibly drawn to—Brendan Salinger, the guy with the rock-star good looks and the richest kid in school, who might just be her very own white knight.

But even when Brendan inexplicably turns cold, Emma can't stop staring. Ever since she laid eyes on him, strange things have been happening. Streetlamps go out wherever she walks, and Emma's been having the oddest dreams: visions of herself in past lives—visions that warn her to stay away from Brendan. Or else.

My Review:
This book was different from other books. The myth, it was a bit like a mix of Beauty and the Beast, and Cinderella, though the latter more then the former. It had elements from both, but it was unique, and different, and I liked it.

The characters were great, and I loved how Emma's history was thrown at us, with bits and peices that made it interesting later. I liked that Brendan was like he was, how he was "cold" and ignored her on weeks on end, but then when it mattered, he was there, and devoted, and it was just really good!

Another thing that I liked was the magic, how Emma was really a born witch, and the curse, and her past self were connected in that way. It was really good!

I loved the bad guys getting what they deserved, but I wish that we could've heard what happened to the semi bad girl whom I didn't like, and neither did Emma.

I loved the short little story that was at the end, it was nice!

All in all, great book, check it out if you can!