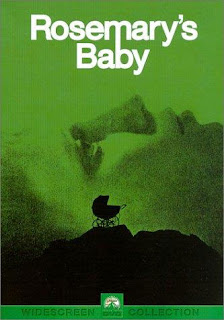 From Goodreads:
The book centers on Rosemary Woodhouse, a young woman who with her husband Guy, a struggling actor, has just moved into the Bramford, an old Gothic style NYC apartment building. The pair are warned that the Bramford has a disturbing history, but they choose to overlook this. Rosemary & Guy are befriended by Minnie & Roman Castavet, an eccentric elderly couple whose apartment backs up to their own. Rosemary finds them meddlesome & absurd, but Guy begins paying them frequent visits.

After a theatrical rival suddenly goes blind, Guy is given an important part in a stage play. Immediately following this event, Guy & Rosemary decide to conceive their first child. Guy is noticed & cast in other, increasingly important roles, & he begins to talk about a career in Hollywood.


After receiving a warning from a friend, Rosemary investigates & confirms that her neighbors are the leaders of a coven of witches. She suspects they are after her child to use it as a sacrifice. However, she is unable to convince anyone to believe her. She is wrong about the coven's reason for wanting the baby, but the truth is even more horrific than she imagined.


My Review:
Rosemary's Baby was awesome! I can see why it was made into a movie! Just great! I really enjoyed reading it, and finished it pretty quickly once I got over my fear that parents would burst in and tell me to do my homework.

And it's a bit weird writing this review, because this book came out before I was born, and only a few years after my dad, and he's almost 50! So that was just a bit strange for me.

But this book, it was just wonderful! I loved how Rosemary was pretty much unaware of how she was being used, right up until the end. It made the story a lot more complicated, and added a layer of "oh, that's what happened then" when you finally connected all the dots, and everything just made sense!

And I really enjoyed the ending, it was a bit abrupt, but I still really enjoyed it! I loved how Rosemary accepts her baby, even if he wasn't exactly normal.

This was a great book, and I hope you check it out, you've had plenty of time to have!