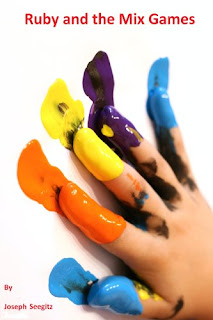 From Goodreads:
Twelve-year-old Ruby Majis is learning how to secrete magical ink from her skin's pores. It's painful work, but necessary if she wants to practice Hue: a dangerous, magical sport that transformed her caring older brother Chance into a cold-hearted scoundrel.

Guided by a trainer with a shady past and partnered with a supernatural boy, Ruby embarks on a journey to find her brother at the Mix Games, the annual Hue tournament held on the other side of the world.

My Review:
Ruby was fun and quirky, and I loved when she growled! Especially since that bugged the "supernatural boy," a lot of the time, he got on my nerves. But he was smart, and an awesome character, if he did treat others not quite as well as he could have.

One thing I had trouble understanding, was this 1 character during the mix games, his/her speech (Not going to explain, but the character was thought to be a guy during that time, and was really a girl but I'll use a male pronoun for the sake of being consistent) was just a bit confusing. I think some of the words were similar to what would've made more sense, like if the person said a body part, he'd meant a different body part.

Other then that, I enjoyed reading this book, and was done in about 4 hours over the course of just barely 2 days, I almost finished on the first day.

Ruby was unique, and so were all of the other characters, and I thought that the premise was quite unique, having an ink that could be pushed out of us to do various things like become light or such.

All in all, a really good book, and I enjoyed it!

*I received this book from the author, just the book, and that did not influence my review*