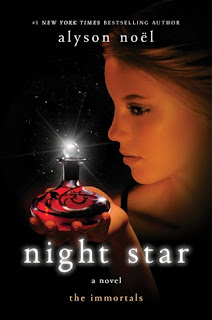 From Goodreads:
After fighting for centuries to be together, Ever and Damen's future hinges on one final showdown that will leave readers gasping for breath. Don't miss this explosive new installment of the #1 bestselling series that’s enchanted millions across the world!

Haven still blames Ever for the death of her boyfriend Roman, no matter how hard Ever's tried to convince her it was an accident. Now she's determined to take Ever down…and destroy Damen and Jude along the way. Her first step is to tear Ever and Damen apart—and she has just the ammunition to do it.

Hidden in one of Ever's past lives is a terrible secret about Damen—a secret that illuminates new facts about her relationship with Jude, but that's so dark and brutal it might be enough to drive her and Damen apart once and for all. As Ever faces her greatest fears about the guy she wants to spend eternity with, she's thrust into a deadly clash with Haven that could destroy them all.

Now it'll take everything she’s got—and bring out powers she never knew she had—to face down her most formidable enemy. But in order to win, she must first ask herself: is her own survival worth dooming Haven to an eternity of darkness in the Shadowland? And will learning the truth about Damen's past hold the key to their future?

My Review:
This book was a bit bittersweet. I remember when Haven was Ever's friend, and when there was a whole lot less issues. But it was good too, that they took one step closer to being together.

I enjoyed this book, it was a quick read, and I loved the developments to the series. Like we learned of a not-so-great past life, and some things were over-come, and some things became just a little bit harder.

I almost feel like it didn't have enough, but I liked that things changed, and then they had the potential to change back, but a bit better.

This was a good book, and I can't wait to read the last one!