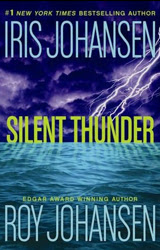 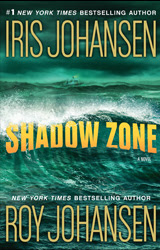 From Goodreads:
It was the assignment of a lifetime. . . .

Brilliant marine architect Hannah Bryson has been given the job of a lifetime. A U.S. maritime museum has just acquired the decommissioned Soviet submarine Silent Thunder for public exhibition. It's Hannah s job to make sure that every single inch of the legendary nuclear attack sub is safe for the thousands of visitors anticipated. Enlisting the aid of her brother, Connor, they examine the enormous vessel and delve into its long---and lethal---history.


But is it really a trap?


In the course of their investigation, Connor discovers a mysterious message behind one of the ship s panels. But before he can figure out what it means, there's a deadly assault on Silent Thunder. . . .


Though the U.S. government tries to warn Hannah away, she'll stop at nothing to find the ruthless mastermind behind her brother s death. Even if it means joining forces with a mysterious man who may be even more dangerous than the enemy she has sworn to bring down. As Hannah finds herself in the crossfire of an epic standoff, her only hope for survival is to unravel the sub's explosive secret. But someone s willing to kill to make sure Silent Thunder stays silent. . . .


From Goodreads:
While mapping the ancient underwater city of Marinth in the Atlantic Ocean, submersible designer Hannah Bryson makes a shocking discovery: she may have finally uncovered the truth about the once-glorious city's mysterious demise. Long ago it was a thriving metropolis bursting with culture and life—Marinth's sudden disappearance has plagued scientists for years. But now, with her unexpected new findings, Hannah realizes that the ancient city's explosive secret could have dire consequences for the modern-day world.

But Hannah isn't the only one who realizes it. When her key artifact is hijacked en route to a research lab, she is thrust into an adventure in which she must match wits against a terrifying enemy who will kill anyone who stands in his way. And when Hannah becomes his target, she knows that her best hope for survival lies with Kirov, a mysterious and deadly man from her past. Together they will race to unravel Marinth’s last great secret in order to prevent a catastrophe of global proportions. Before the lethal game is over, however, Hannah will realize that no one is above suspicion.


My Review:
These books were really good. The covers look a bit strange, maybe even fake to me, but other then that, I really liked them! And I feel a bit stupid-I thought that Silent Thunder was the second book. It was the one that I had. And I was wrong. So I waited for nothing, basically. So yeah, that's why I feel stupid.

But these were really good books, I loved the action, and how the characters dealt with their problems, and I could really see some more books with these characters! And I really hope that I will! Hannah was brave, strong, and not afraid to speak her mind, and Kirov was strong, hard, and willing to do what it took to get the job done. I personally think that they were well suited for each other, and their chemistry made up half of what made the books worth while!

So these were really good books, if you haven't read them yet, then do so!