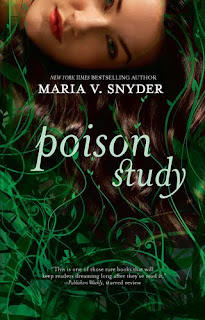 From Goodreads:
About to be executed for murder, Yelena is offered an extraordinary reprieve. She'll eat the best meals, have rooms in the palace-- and risk assassination by anyone trying to kill the Commander of Ixia.

And so Yelena chooses to become a food taster. But the chief of security, leaving nothing to chance, deliberately feeds her Butterfly's Dust and only by appearing for her daily antidote will she delay an agonizing death from the poison. As Yelena tries to escape her new dilemma, disasters keep mounting. Rebels plot to seize Ixia and Yelena develops magical powers she can't control. Her life is threatened again and choices must be made. But this time the outcomes aren't so clear....


My Review:
Oh, I loved this book! It was just excellent! The pages flew, and I wanted to know what was going to happen to Yelena and Valek next! I loved them being together, and them each by themselves!

If you might've noticed, Posion Study was the RAK that I got (my first one, whoo! And thanks, Kellie!) So I got it around 3 pm yesterday. I was done by 8:30. And I had supper. And some things to do on my computer. And the doggies. And supper. So in all, about 3 hours of actual reading time. So I read it fast. I really liked this book!

I loved the posions, and I loved how the other characters learned of Yelena's secrets, like Ari learning from Yelena herself, but when she wasn't herself, persay. I'll leave it at that, so you will want ot read more, and then actually read the book since it was just great! It'll be going on my reread pile, I read it quickly, and I want to read it again!

All in all, this was an AWESOME book that you guys really, really, really need to read, and once you have, if you haven't already, own it!!!!!