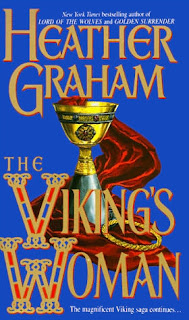 From Goodreads:
Her wild spirit made him crave her...

Her firebrand—hair blazed as glorious as a sunrise. Her long limbs promised the sweet mysteries of the night. Rhiannon, King Alfred’s favorite niece, was enraged when her uncle sealed an alliance of war by pledging her to Eric, the towering golden-haired prince whose blue eyes penetrated her with a glacial stare. But the more she fought the marriage . . . the man . . . the more she became inflamed by the fire that lay beneath his Viking ice.

His passion pierced her heart...


His broad shoulders as hard as the steel of his sword, Eric bowed to no man. The only battle he feared losing was with Rhiannon. For she had reached into the savage recesses of his heart. No campaign on the field, no treason from within, would he fight as fiercely–or with such desire . . . as the war he waged to possess what was his.

My Review:
I really didn't like Eric. He wouldn't understand concepts like feminism, and he thought that males were better. And Rhiannon got treated awful for most of the book, like property, not like a human being! I hated that! I know I wouldn't have wanted to live at that time! It made me really annoyed.

But in the end, I liked him because Rhiannan did, and she was the one that was going to have to spend the rest of her life with him, so it was her choice. But anyways.

Besides being annoyed at Eric for most of the book, and the other males when they were of a similar mind, I enjoyed this book. It had character, and I loved how Rhiannon stood up to the unfairness of her situation. Her cousin was NOT a good guardian, being the king and all. I didn't like him, either. He hit her! I wanted to drag him to now and show him what the world is like, and how he shouldn't treat women that way.

Other then that, a good book that I really liked!