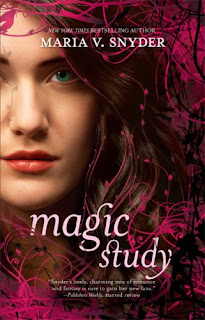 From Goodreads:
So far, I've managed to survive. You would think after being kidnapped as a child, imprisoned in my teens and released to become a poison taster, I would have endured enough. But no. The discovery of my magical abilities—powers forbidden in Ixia—has resulted in an execution order. My only chance is to flee to Sitia, my long-lost birthplace.

But Sitia is unfamiliar. I'm treated like an enemy—even by my own brother. Plus I can't control my powers. I want to learn about my magic, but there isn't time. A rogue magician has emerged and I'm targeted as his next victim.


Will my magical abilities save me…or be my downfall?

My Review:
I loved this book! It was just amazing! I loved Yelena, she was just great, and with Valek, and it was just really great! And yeah, there was just so much going on, it was just fantastic to watch their adventures play out!

Yelena learned more about herself, her family, and about her magic, and it was great! I just really loved this book! It was awesome! Because she thought she was an orphan, and a citizen of Ixia her whole life, these are pretty big changes!

I loved the new characters, and learning more about previous ones, and her family, and the intrigue that was there, and the bad guys, I'm glad that they all got what they deserved, at least, for a little while. Or permanently There were quite a few people that wanted to do harm, and I know of at least 1 unexpected one. It was just was a really good book! I really loved reading it! I know I'm obsessed now. It was just really great!

I loved meeting Opal, I'm going to read the "Glass" series next (after Fire Study) and so it was nice to meet her! She was just awesome, and I can't wait to see what roles she's going to be playing in the series!