Taking YA out of Romance; Why It Can't be Done
I'm going to give you some definitions.

Romance:
1. a novel or other prose narrative depicting heroic or marvelous deeds, pageantry, romantic exploits, etc., usually in a historical or imaginary setting.

2. the colorful world, life, or conditions depicted in such tales.


3. a medieval narrative, originally one in verse and in some Romance dialect, treating of heroic, fantastic, or supernatural events, often in the form of allegory.

Young Adult:
1. a teenager (used especially by publishers and librarians).

2. a person in the early years of adulthood.

So here's the problem. You can't take YA out of Romance, because it was never there. That's why it can't be done. Have you ever read a book that was Romance, but with some plots that were young adult? If you have, you should give me an example. I certianly don't have one, and I wouldn't mind being proven wrong!

But there has been YA books that have had elements of romance all the time, why, love/relationships/unrequited love/other sorts of things that I can't think of off the top of my head are the main bread and butter of YA books.

So what is the YA genre really? In my mind, it means a book that most often depicts a teenager, with angst, and normal problems, and, depending on the other genres that might be mixed in, not-so-normal problems. That's my basic definition of YA.

And I really enjoy YA. It's really good, and since I'm a teen, it's nice to escape into the worlds of people who are my age, and who are doing all these incredible things, and have allowed me to tag along for the ride and just see what happens.

So what's your opinion; is there ever really YA as a mixed in plot or a side plot of romance? 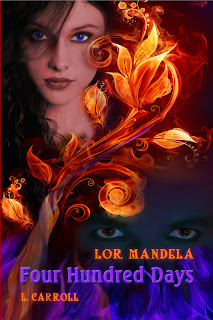 From Goodreads:
When Audril, the heiress to the Lor Mandelan throne, sneaks away to Earth to save one of her dearest friends, she finds that a power hungry tyrant from her own world has begun systematically obliterating towns and cities to get her to turn herself over to him.

On Earth, she meets a wildly eccentric old lady named Teedee Venilworth whose imaginary butler/fiance supposedly holds the key to her success. But how can someone help if he doesn't exist? Could it be that creatures who dwell in shadow are not exclusive to Lor Mandela?
Book number two in the Lor Mandela Series, "Four Hundred Days", is an action-packed whirlwind of intrigue and fantasy. Join the extraordinary characters from the first book, (both the good and the evil), as they traverse the haunted corridors of Alcatraz Penitentiary, travel via portal to an ancient castle on the cliff shores of Ireland, and meet a foreboding race of mystic warriors known as the Solom.

Soar on the back of a large horse-like creature to the Northern High Forests, and discover that on the picturesque world of Lor Mandela, your friends can become foes, your enemies your allies, and just because someone dies, it doesn't always mean that they're dead. 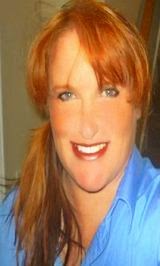 Bio:
Barely sane author of the Lor Mandela Series (Book #1 DESTRUCTION FROM TWINS and book #2 FOUR HUNDRED DAYS). Hogwarts is in my backyard, Narnia, in my living room, but my favorite is the portal in my kitchen that takes me to Lor Mandela! Hope you enjoy the journey, too! 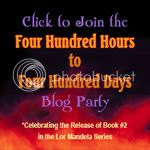