Week 5 Reviews: Even the Darkest Stars, All the Wandering Light 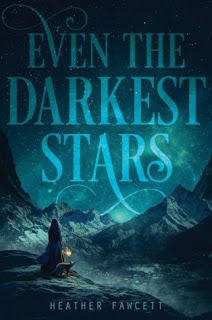 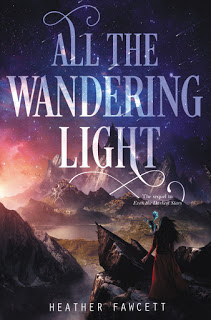 From Goodreads:
Kamzin has always dreamed of becoming one of the Emperor's royal explorers, the elite climbers tasked with mapping the wintry, mountainous Empire and spying on its enemies. She knows she could be the best in the world, if only someone would give her a chance.

But everything changes when the mysterious and eccentric River Shara, the greatest explorer ever known, arrives in her village and demands to hire Kamzin—not her older sister Lusha, as everyone had expected—for his next expedition. This is Kamzin's chance to prove herself—even though River's mission to retrieve a rare talisman for the emperor means climbing Raksha, the tallest and deadliest mountain in the Aryas. Then Lusha sets off on her own mission to Raksha with a rival explorer who is determined to best River, and Kamzin must decide what's most important to her: protecting her sister from the countless perils of the climb or beating her to the summit.

The challenges of climbing Raksha are unlike anything Kamzin expected—or prepared for—with avalanches, ice chasms, ghosts, and even worse at every turn. And as dark secrets are revealed, Kamzin must unravel the truth of their mission and of her companions—while surviving the deadliest climb she has ever faced.
From Goodreads:
After the terrifying events on Mount Raksha, the witches have returned, and River has betrayed Kamzin to regain his dark powers. The witches' next step: march on the Three Cities and take over the Empire—led by River's brother, Esha.
If Kamzin is to save Azmiri and prevent the fall of the Empire, she must find a star that fell in the Ash Mountains to the north. Fallen stars have immense power, and if Kamzin and Lusha can find the star, they can use its magic to protect the Empire. To get there, Kamzin has allied with Azar-at, the dangerous and deceptive fire demon, who can grant her great power—in exchange for pieces of her soul. But River wants the star too, and as their paths collide in dangerous and unexpected ways, Kamzin must wrestle with both her guilt and her conflicted feelings for the person who betrayed her.
Facing dark magic, a perilous journey, and a standoff against the witches, can Kamzin, Lusha, and Tem find the star and save their Empire?
My first review of Even the Darkest Shores
My Review:
Oh, man, it was really fantastic to read these books! I previously read Even the Darkest Stars, but that was a while ago now, and I had to read it again before I continued on with the series. I just love reading Kamzin and River's story!
Even the Darkest Stars was such a great adventure, though there were losses along the way. Plus there's the mystery and worry about her sister leaving without River, and why she did that. I loved getting to know this world and the characters again!
One thing that I loved about All the Wandering Light, was that we did have River's perspective as well. And I really enjoying getting his thoughts, and since they weren't together for parts of this book, their separate but similar adventures!
I wasn't sure how things were going to work out. There was obviously the threat from the witches, but then there was also the worry of Azar-at, because he is a fire demon, and really not to be trusted. So I was apprehensive about how things would work out, but they did, and it was fantastic to read!
I loved reading both of these books so much, and I'm just so glad that I did because they were so entertaining!

Author: Heather Fawcett
Series:  Even the Darkest Stars #1, 2
First Read: September 6th, 2017
Read: February 3rd, 4th, 2021
Source: Own
Reason Why: Sounded really good, and they're Prequel & Sequel Challenge 2021 Books and All the Wandering Light is a Sophomore Challenge Book and a WoW Book!
Publisher: Balzer + Bray
Published: September 5th 2017, December 4th 2018
Even the Darkest Stars:
All the Wandering Light:
Posted by Louisa @ Words I Write Crazy at 10:30 AM