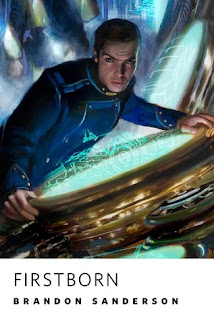 From Goodreads:
Of the son of a High Duke of the interstellar Empire, much glory is expected. And expected. And still expected, despite endless proof that young Dennison Crestmar has no talent whatsoever for war. But the life Dennison is forced to live will have its surprising lessons to impart...
My Review:
This was a really fantastic read. I don't know why I put it off, it only took like half an hour to read, and I know I love Brandon Sanderson's writing. I mean, it was a little longer than your average short short (who is surprised by this?) But it was a really quick, easy read, and I really enjoyed it!
I really enjoyed this story of a guy who fails where his brother excels, and has basically wallowed in his failure. But his father-and his emperor-keep pushing him to follow in his brother footsteps. And when we find out the reason why, well, it's a little shocking!
To be fair, Dennison may have been intensely studying his brother for the past year, but he was missing a bit of context. But that studying definitely gave him a leg up when everything went down. But still things looked grim, and I had to know what was going to happen next!
The ending was pretty incredible, though! Just when all hope seemed to be lost. It was really clever, and it could've easily gone wrong. It was a bit shocking what happened, and a bit abrupt, but it is a short story, and it was an epic note to end on. It just really came full circle!
This was a really wonderful read, and I'm so glad that I read it!