Week 5 Review: The Power of Hades 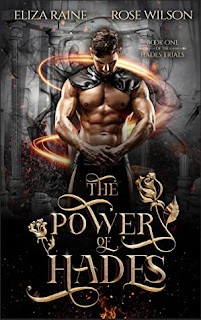 From Goodreads:
I've been kidnapped by Zeus. Plucked from the streets of Manhattan and frightened half to death by a freaking Olympian god.
And now I'm trapped in the Underworld, being forced to compete in a series of deadly trials for the position of Queen of the Underworld. Which would mean marrying Hades, the utterly terrifying Lord of the Dead. Who the hell wants a husband at all, let alone one made of smoke and riddled with death?
I have to get back home, to New York and my brother. But I can't leave without completing the trials and they've been designed for a godly Queen, not Persephone - barista and botanical garden enthusiast.
I'm surrounded by lethal, all-powerful maniacs. Sexy-as-hell maniacs, sure, but as dangerous as they come. And I'm going to have to prove to all of them that there's a goddess of hell inside me. It's the only way I'll survive the Hades Trials. But then what? And why, why, why am I so desperate to see under Hades smoky exterior and find out what he's hiding from me?
If I win the trials, I have to marry the devil himself. But losing might mean losing my life.
My Review:
This was a really great read! I've read other Hades and Persephone retellings, but usually they were YA, and this was not YA. And it's very short, like, I think all 3 books in this series, when combined, is going to be around 400-500 pages, so one longer full length novel. But because it's short, I devoured it!
I'm going to have to go back and read the Immortality Trials series before I continue on with this one. Because there's cross over characters, and that series happened first, well, I have to know what happened then before I can continue this series, you know?
This book is under 200 pages, but a lot happens, from the introduction to the world, the first few trials, some interesting interactions with Hades, and a whole bunch of questions. It was such a great start to the series-plus that first chapter, I just want to know what the heck happened that got her sent to the human world without her memories or her power!
Honestly, I have my suspicions about that garden that she dreams about. Just the fact that it's helping her, and nobody else seems to know about it, that it wants to be kept a secret, basically, it all adds up to something nefarious in my book!
I really enjoyed reading this book, and I can't wait to continue the series!