Week 7 Review: To Sleep in a Sea of Stars 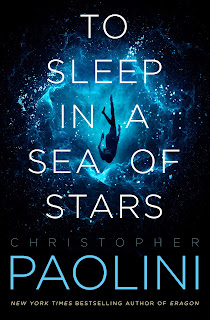 From Goodreads:
To Sleep in a Sea of Stars is a brand new epic novel from New York Times bestselling author Christopher Paolini.
Kira Navárez dreamed of life on new worlds.
Now she's awakened a nightmare.
During a routine survey mission on an uncolonized planet, Kira finds an alien relic. At first she's delighted, but elation turns to terror when the ancient dust around her begins to move.
As war erupts among the stars, Kira is launched into a galaxy-spanning odyssey of discovery and transformation. First contact isn't at all what she imagined, and events push her to the very limits of what it means to be human.
While Kira faces her own horrors, Earth and its colonies stand upon the brink of annihilation. Now, Kira might be humanity's greatest and final hope . . .
My Review:
This book was an incredible read! It's so very different from Eragon, between the genre, as well as following a female protagonist. And those combined just lead to a different tone, and I'm thrilled from this new and different story from an author that I previously really enjoyed! Yeah for more to enjoy from Christopher Paolini!
I really enjoyed the different parts of this story, so the action could ebb and flow, the characters could react, and they could learn. It was smartly structured, and it was like a series of episodes in a show, just ramping up the story, and I loved it!
Getting to know Kira was really great, as her life is utterly transformed when she gets covered with an xeno, and it becomes a quest to get out of it, as well as find some way to win the war that humanity got plunged into.
We slowly got pieces of this world, from characters imparting their memories of things that happened, as well as learning about the aliens and the history there. As well as all the cool science and technology, it all created this expansive universe that I just want to know more about. Though who knows how it'll all connect and where it'll go from here.
But that ending? It's a little bittersweet, but it's so very satisfying. And I'm really excited for the future of this book, because I read that Christopher Paolini said that this world is also going to have stories set in the present day, so I can't wait to see how it's all woven together!

This was a fantastic read, and I can't wait to see where the Fractalverse goes from here!