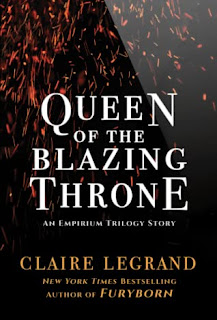 From Goodreads:
In Kingsbane, you met Obritsa Nevemskaya—the mysterious child-queen of Kirvaya. Now, in this thrilling novella, learn more about Obritsa's story and how her fate became intertwined with those of Rielle, Audric, Ludivine, and Corien.
Twelve-year-old Obritsa is a temple maidservant, loyal to a novice firebrand who hopes to be named Queen of the Blazing Throne. When Kirvaya's magisters choose Obritsa as queen instead, the country erupts with fury.
But Obritsa doesn't care what they think. She has her own secrets, her own agenda—and outrage is the least of her problems. In the capital city, more children go missing every day. Whispers fly through the streets of a great danger brewing in the far north. And some Celdarian girl she's never heard of has been named Sun Queen.
As Obritsa unravels these mysteries, she soon realizes the war she thought she was fighting is part of something much bigger—a conflict centuries in the making—and that her power could decide who wins, and who loses.
My Review:
This was such an excellent read! I loved getting Obristsa's story, and seeing parts of book 2 from her perspective, as well as before and after what we previously saw, was just excellent, and to find out how she got to be in the position that she did in book 3! It just added to the full picture of the series!
I'd forgotten how young Obritsa was. And finding out how much she'd gone through to get to her position as Queen, well, she's had a tough life. And she became a pretty impressive actress at her age with the act of a young, kinda dim witted queen who is so exuberant. But she was intelligent and calculating, and I felt so badly for the pain her journey has brought her thus far.
And to think that the plot to steal the children to create the army was only one part of the plan. There was Rielle, though Corien's judgement was clouded there. But I loved getting this piece of the puzzle, it just gave more details to the tapestry that is this series, and I'm so glad that we got this story!
I mean, I had to know that it was going to end badly. I knew where she was in book 3. But that ending was pretty hard to read, to know she was in the hopeless position. I know how it works out, but seeing how they got there was sad to read.
This was a really fantastic read, and I enjoyed it so much!