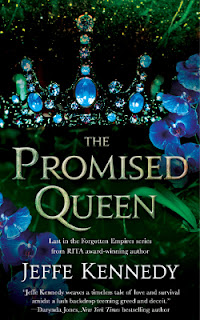 From Goodreads:
In The Promised Queen, the thrilling finale to Jeffe Kennedy's Forgotten Empires trilogy, the fate of the world hangs in the balance as Con, Lia, and their allies sacrifice everything in a final bid to destroy the corrupt empire.
Claim the hand that wears the ring, and the empire falls.
Conrí, former Crown Prince of Oriel, claimed the hand that wears the Abiding Ring, but the prophecy remains unfulfilled. Queen Euthalia of Calanthe returned to her island kingdom, but broken in mind and body. With the blood of war unleashing ancient terrors, Calanthe isn’t the haven it once was.
Lia must use her magical bond with Calanthe to save their people while Con fights to hold off the vengeful Emperor Anure and his wizards. Con and Lia will have to trust in each other—and in love—to fend off ultimate disaster.
My Review:
I loved reading this book! I've really enjoyed this series, and I was really anticipating seeing how it would end. And it didn't disappoint, it was a thrilling read, and it was an amazing end to this series. And I'm just so glad that I read this book and this series!
I basically devoured this book. After the ending of the previous book, well, I had to know what was going to happen next, with Lia, with Calanthe, as well as dealing with Anure. I really enjoyed how it all worked out!
There was a good deal of relationship drama and building blocks, between the whole "Con could be king" and that he'd had to spend the majority of his time in his country, and she in hers, well, it wouldn't work that way. Plus there's Con's need to get revenge on Anure, even at the cost of his own life, which isn't contusive for the couple to have a future together! So that was fun to read.
I loved that we got answers in this book, of Lia and her mysteries. Of why Ambrose and Merle were the way that they were. I do have a question or two about them, though, as to how they got into that situation in the first place, though!
Reading this book was fantastic, and it was a wonderful end to the series!