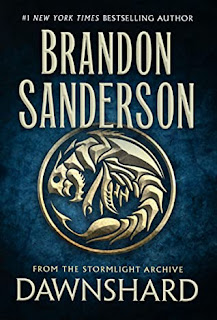 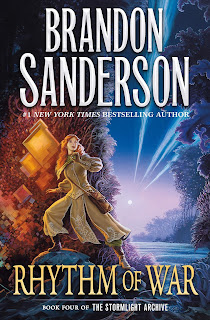 From Goodreads:
From Brandon Sanderson author of the #1 New York Times bestselling Stormlight Archive and its fourth massive installment, Rhythm of War—comes a new hefty novella, Dawnshard. Taking place between Oathbringer and Rhythm of War, this tale (like Edgedancer before it) gives often-overshadowed characters their own chance to shine.
When a ghost ship is discovered, its crew presumed dead after trying to reach the storm-shrouded island Akinah, Navani Kholin must send an expedition to make sure the island hasn't fallen into enemy hands. Knights Radiant who fly too near find their Stormlight suddenly drained, so the voyage must be by sea.
Shipowner Rysn Ftori lost the use of her legs but gained the companionship of Chiri-Chiri, a Stormlight-ingesting winged larkin, a species once thought extinct. Now Rysn's pet is ill, and any hope for Chiri-Chiri's recovery can be found only at the ancestral home of the larkin: Akinah. With the help of Lopen, the formerly one-armed Windrunner, Rysn must accept Navani's quest and sail into the perilous storm from which no one has returned alive. If the crew cannot uncover the secrets of the hidden island city before the wrath of its ancient guardians falls upon them, the fate of Roshar and the entire Cosmere hangs in the balance.
From Goodreads:
The Stormlight Archive saga continues in Rhythm of War, the eagerly awaited sequel to Brandon Sanderson's #1 New York Times bestselling Oathbringer, from an epic fantasy writer at the top of his game.
After forming a coalition of human resistance against the enemy invasion, Dalinar Kholin and his Knights Radiant have spent a year fighting a protracted, brutal war. Neither side has gained an advantage, and the threat of a betrayal by Dalinar's crafty ally Taravangian looms over every strategic move.
Now, as new technological discoveries by Navani Kholin's scholars begin to change the face of the war, the enemy prepares a bold and dangerous operation. The arms race that follows will challenge the very core of the Radiant ideals, and potentially reveal the secrets of the ancient tower that was once the heart of their strength.
At the same time that Kaladin Stormblessed must come to grips with his changing role within the Knights Radiant, his Windrunners face their own problem: As more and more deadly enemy Fused awaken to wage war, no more honorspren are willing to bond with humans to increase the number of Radiants. Adolin and Shallan must lead the coalition's envoy to the honorspren stronghold of Lasting Integrity and either convince the spren to join the cause against the evil god Odium, or personally face the storm of failure.
My Review:
I loved reading these stories! I've just been devouring the Cosmere world, and with every book, I've become more and more excited to continue, and it's just so freaking wonderful! And for this series in particular, it's a bit different from the others for a variety of reasons, but being further along the series, the better the books are, espcailly if you're a reader who wants details, wants to understand the world, because with this series, it takes time to get those details.
Dawnshard was really fantastic to read, I loved spending more time with Lysn and Ropen. Like the synopsis says, this gives us a chance to spend time with characters who don't get much screen time in the full length books, and I enjoyed that time! Plus I was really excited to see what they discovered, and wonder how it would impact the world and the future books, and that was just really great!
I didn't know going in who this book would be about, if anybody, since all 3 of our main characters have had their books about them, or if it would repeat, or if it would do something different. So that was something I was looking forward to learning.
I did know, however, that this book was going to be pretty emotional, dealing with mental health and such. Which is good, because these characters have gone through the wringer, and have some issues that they need to work on.
These were both just fantastic reads, and now I'm a little stunned, because it's going to be at least a year until we get more Cosmere stories, and 3 until we get the 5th Stromlight Archive book. But I'm so glad that I read them!