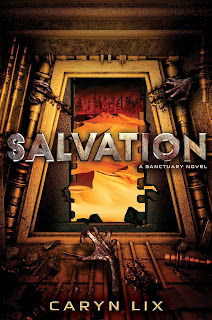 From Goodreads:
When Kenzie and her friends find themselves trapped on a strange planet, they must risk everything to save themselves and Earth in this thrilling final book in the addictive Sanctuary trilogy!
Fall down seven times, get up eight.
These are the words Kenzie has always lived by. The problem is, she's fallen down too many times to count.
Kenzie and her friends have already escaped two vicious alien attacks—not to mention the corporate bounty hunters sent to capture them. They're haunted by the friends they've lost and the hard choices they've had to make in this war they never asked for.
And now, thanks to superpowers she received from the very aliens she's fighting, Kenzie has stranded everyone on a strange planet with no way off. She just wanted a safe place from the monstrous creatures terrorizing her world, but this new planet has dangers of its own, and Kenzie will have to uncover its secrets if she has any hope of ever making it home again.
Sacrifice is nothing new for Kenzie. She'll do anything—anything—to destroy the aliens that killed both of her parents. But how can Kenzie save Earth if she can't even save the people she loves?
My Review:
It was so fantastic to read this book! After the ending of Containment, well, I needed to know how it was going to end! We learned a lot about the aliens, and we had some wonderful character moments, and it was a wonderful end to the series!
This book answers so many questions, like what the aliens want, and a bullet points version of their history, and those two things helped understand what was going on very well. Though the cost it came at was higher then the characters would've liked to pay.
Up until the very end, I was hoping that there was going to be a hey, this thing that they thought happened, this thing that was pretty devastating, well, it turns out that it didn't quite go the way they thought. But I guess that had been done already in the series, and we couldn't have another miracle like that, no matter how much it hurt.
But man, that ending! It hurt, and it was pretty grim, but it was pretty satisfying. If only the corporations were taken down at the same time. But alas, they're a problem for the future, even if we're not going to see it, well, I'm happy with where we left everybody who made it through.

This was such a great read, and I can't wait to see what Caryn Lix writes next!