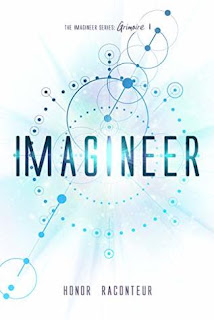 From Goodreads:
Imagination has no limit…
Our Heroine: Me. And boy, are we all in trouble. A seventeen-year-old with a love of fantasy and unmanageable hair? Hardly anyone’s idea of the knight in shining armor. I went about life with no idea the world around me was not as it seemed, until one dark night I saw glimpses of things I knew shouldn’t exist.
I’ve got enough problems of my own to deal with, but the glimpses of what I’m certain is a magical world that tantalize me like no other. When I find a pair of turquoise glasses that allow me to properly see everything, I put those bad boys on without a second of hesitation.
I probably should have hesitated. I’m now neck deep in kobolds, pookas, magic castles, youkai, unruly werewolves, talking houses, and an ancient magical mystery in need of solving.
Oh, and magic lessons. Turns out I’m an Imagineer, which was totally unexpected. An Imagineer creates by using imagination, willpower, and magic to form whatever they wish. Their only limitation is imagination, and imagination? Has no limits.
At least, if you’re doing it right.
Why the time hasn't come yet...
Well, I only found Honor Raconteur's writing last year I believe, maybe 2019, and then I knew that I would want the sequel so badly, and that just came out, so I hopefully will read this soon! What about you guys? Happy reading!
Posted by Louisa @ Words I Write Crazy at 6:00 AM