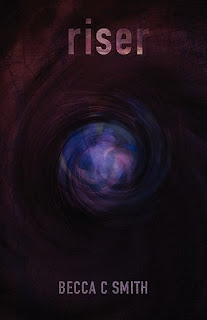 From Goodreads:
Black swirling holes churning madly in the center of every corpse. This is how eighteen-year-old Chelsan Derée sees the deceased. Her ability to connect to the black spinning holes allows her to control every dead thing within a four-mile radius.

But that's the least of her problems. It's 2320 and Chelsan Derée has to survive another year of high school, which for her is pure and utter torture, mainly due to the fact that her schoolmate Jill Forester's favorite activity is making Chelsan's life a living hell. If that isn't enough, Chelsan's impossible crush on Ryan Vaughn makes her brain do somersaults on a regular basis, especially since she is positive he doesn't know she exists. And being eighteen Chelsan has to deal with the pressure of whether or not she should take a little pill called Age-pro, which cures aging, making the world eighteen forever and highly over-populated.

When Chelsan's mother, Janet, is brutally killed, along with everyone else in her trailer park, Chelsan finds out that she was the intended target. Chelsan must use her power to raise and control the dead to save herself, protect her friends and take down the man responsible for murdering her mother.

My Review:
This was a fantastic book! Romance, dead things, constant death-threats, and people trying to kill Chelsan/threaten the people that she loves, well, just excellent to read! I enjoyed this book so much, and of all review tour books, this one was extra good for me!

One complaint that I had, because of annoyance, was Chelsan's name. Because spell check doesn't think it's a word, which means if it's not a word, it's not a name, either. Though fantasy does have a bit of slack there. But still. Why couldn't she be Chelsea instead?

The Age-pro pills, well, yeah, they have their highs and their lows. Highs, people live forever, basically. Lows, because of hardly anyone dying, there's overpopulation. And then there's Chelsan's ability!

That it was her grandparents that were after her, that wanted to kill her, basically, and were the ones behind the trailer park massacre, yeah, not fun! But this book was really high paced, and I enjoyed every element from romance to mystery!

Really great book, and I just enjoyed it so much!