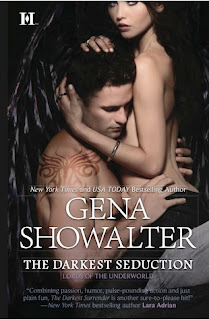 From Goodreads:
At long last, New York Times bestselling author Gena Showalter unveils the story of Paris, the darkest and most tormented Lord of the Underworld….

Possessed by the demon of Promiscuity, immortal warrior Paris is irresistibly seductive—but his potent allure comes at a terrible price. Every night he must bed someone new, or weaken and die. And the woman he craves above all others is the one woman he'd thought was forever beyond his reach …until now.

Newly possessed by the demon of Wrath, Sienna Blackstone is racked by a ruthless need to punish those around her. Yet in Paris's arms, the vulnerable beauty finds soul-searing passion and incredible peace. Until a blood feud between ancient enemies heats up. Will the battle against gods, angels and creatures of the night bind them eternally—or tear them apart?

My Review:
Such a fantastic book! We've been waiting for this book, since oh, wait was it, maybe Whisper? Or earlier, I forget which exact book where Paris and Sienna met, but their story has been building since that moment! Loved it so much!

So we got to met a few others that are demon-possessed, and yeah, I kinda wonder what happened to them, since they weren't mentioned after Sienna and Paris escaped. But oh, well, they weren't the main focus of the book.

I really enjoyed Paris' journey to find Sienna, and all the favours he gave, or used, or trades, or whatever he had to do to complete his plan! Though there were a few snags-like a fallen angel obsessed with one lady who was able to help him. And obsessed guy was a bit of a problem!

Wow, that was such a great ending! Because now they have all the artefacts, now they can start looking for Pandora's Box, and finally be safe! And Sienna is the one that kills Cronus, they just didn't see, because that wasn't the view that Danika had!

Such a great book, and now I just want more-because more was set up in this book! Yeah!