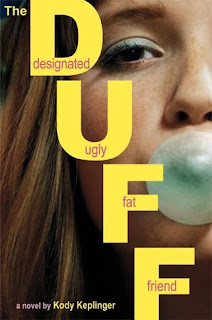 From Goodreads:
Seventeen-year-old Bianca Piper is cynical and loyal, and she doesn't think she's the prettiest of her friends by a long shot. She's also way too smart to fall for the charms of man-slut and slimy school hottie Wesley Rush. In fact, Bianca hates him. And when he nicknames her "the Duff," she throws her Coke in his face.

But things aren't so great at home right now, and Bianca is desperate for a distraction. She ends up kissing Wesley. Worse, she likes it. Eager for escape, Bianca throws herself into a closeted enemies-with-benefits relationship with him.

Until it all goes horribly awry. It turns out Wesley isn't such a bad listener, and his life is pretty screwed up, too. Suddenly Bianca realizes with absolute horror that she's falling for the guy she thought she hated more than anyone.

My Review:
This was a really fantastic book! Well, not the idea that people are labelled with new things like DUFF, since the old regulars aren't really offensive that I can think of off the top of my head, but DUFF kinda actually is, I mean, designated ugly fat friend? AKA friend who isn't as pretty as the others?

Really enjoyed reading about Bianca, her voice was just awesome, and there and in you face with some pretty great sarcasm! But also dealing with a not so easy home life, and having the whole DUFF label, and all that!

Then there's Wesley, and their relationship, because it's a pretty big part of the book! Their relationship kinda reminded me of the one from The Way I Loved You by Taylor Swift, it had elements from both the crazy relationship where there's love, and the steady one where there really isn't.

I really could relate to Bianca. I might not have close friends like she does (or really friends at all) but of them, I'm the plainest, in the worst shape. So while I know most people have insecurities, well, everyone things their own are the worst. Yeah. So really enjoyed reading this book!

This was a really great book, great contemporary, and I know I'll reread it!