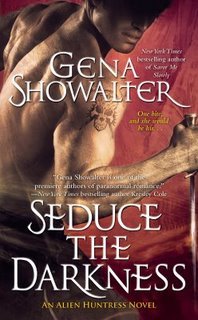 From Goodreads:
SHE HAS A BODY MADE FOR TEMPTATION...AND A KISS TO DIE FOR.

The war between otherworlders and humans changed Earth beyond recognition. It also saved Bride McKells's life. Before, the gorgeous vampire was a target for every fanatic with a stake and a crucifix. Now, she's free to roam the streets -- and desperate to find others of her kind. One man claims to have the answers she seeks. Devyn, King of the Targons, is a warrior and a womanizer, and he makes no secret of how much he wants Bride -- and how dangerous he could be to her in every way.

An avid collector of women, Devyn easily seduces human and otherworlder alike. Until now. Not only does Bride resist him, but she leaves Devyn feeling something entirely new...a bone-deep need bordering on obsession. Her blood is the key to curing a vicious alien disease, but helping Bride uncover her origins will compel her to choose between electrifying passion and a destiny that could tear her from Devyn's side forever.


My Review:
This was an awesome book! I absolutely loved it, and how confident in themselves Bride and Devyn are! They were just hilarious, and great people to be around, because they stand for their friends, and they're handy in a battle!

Bride's past is shrouded in darkness, because she was just in a town, and with no memory of who she was, what she was, but she learned, a bit, mostly through books and movies, however far they were from the truth they could be. And yeah, this book explores that, and why she has "Bride McKell" tattooed on her arm!

Loved Devyn, who was introduced in Enslave Me Sweetly, and a taster of all women, until he meets Bride, and suddenly, he doesn't want to sample from various groups, from species, to types of workers (waitresses, maids) and yeah, he was brought up to think that sex was filthy, and that influenced how he treated Bride for a while, and she didn't like it at all! Which is just kinda funny, because by drinking each other's blood, they were married in the eyes of vampires!

It was pretty great how Bride's blood can cure the Schon disease, and the reason why is in part because she's a vampire, she's a vampire with all the powers ever, the most powerful of vampires. Which is why she was sent above to the surface-if she stayed, she would've been killed. As it was, everyone thought that she was dead.

Yeah, I really enjoyed this book! It was just so freaking good!