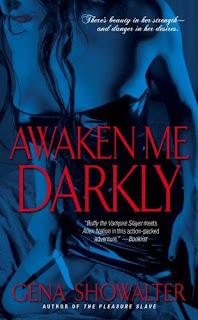 My Review:
Oh, wow, such a great book! I just loved rereading this book, because I mean, it's one of the 2 books that I've read on a semi-frequent basis, and that I can basically read in 1 sitting, and I think my time on reading it goes down each time!

I love Mia and Kyrin's relationship, that he knew from when he first met her that he would be with her, because of the picture in his special Arcadian necklace. And how they had so many physical fights when the met, a bit of a competition, even if he went easy on her, because of said fore knowledge.

The whole plan that Mia came up with, with the fake move-up execution of his sister, that was a bit ingenious, besides the fact that it didn't work, but that was because Kyrin had powers that that they didn't know about, so yeah.

That her mom had slept with one of her brothers (who I know has a different mom, the brothers and Mia share a dad) and then brainwashed the other when their dad killed the first brother, that was not fun for Mia to learn! And yeah, I really wanted to hurt her dad for that!

Loved this book so much, and now I have to read this whole series now!!!