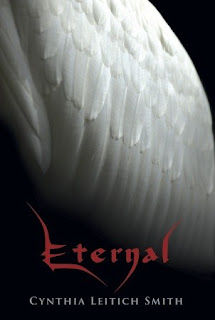 From Goodreads:
With diabolical wit, the author of TANATALIZE revisits a deliciously dark world where vampires vie with angels — and girls just want to have fangs.

At last, Miranda is the life of the party: all she had to do was die. Elevated and adopted by none other than the reigning King of the Mantle of Dracul, Miranda goes from high-school theater wannabe to glamorous royal fiend overnight. Meanwhile, her reckless and adoring guardian angel, Zachary, demoted to human guise as the princess's personal assistant, has his work cut out for him trying to save his girl's soul and plan the Master's fast-approaching Death Day gala. In alternating points of view, Miranda and Zachary navigate a cut-throat eternal aristocracy as they play out a dangerous and darkly hilarious love story for the ages.

My Review:
This was such a great book! And it made a lot more sense then Tantalize, so that meant that I enjoyed it so much more! Really enjoyed this book, and while it's set in the same world, it didn't have Quinice or Kieran in it. But reading the synopsis' of the next two books, it seems like things will be different there!

I really enjoyed having both Miranda and Zachary's POV's, because then we knew what was going on better, and things made a lot more sense, and that was really great! I enjoyed all of that a lot, and going back and forth, and getting more information!

The romance was so good, too! Though he's her guardian angel, he's fallen in love with her, and over the course of this book, she falls in love with him, even though she thinks he's human, and thus, lower then her own vampire status. But they still are in love!

Oh, that ending! That was unexpected, and a bit hard to read! That the good guys won-and Miranda chose to die. Not what I would've thought this book would end, but it was good. Not fun, but good, and it was the right thing, however hard!

I enjoyed this book so much, and I can't wait to read more!