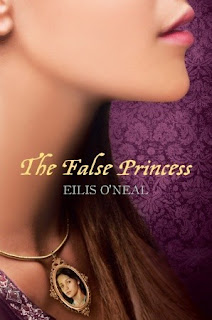 From Goodreads:
Princess and heir to the throne of Thorvaldor, Nalia's led a privileged life at court.  But everything changes when it's revealed, just after her sixteenth birthday, that she is a false princess, a stand-in for the real Nalia, who has been hidden away for her protection.  Cast out with little more than the clothes on her back, the girl now called Sinda must leave behind the city of Vivaskari, her best friend, Keirnan, and the only life she's ever known.

Sinda is sent to live with her only surviving relative, an aunt who is a dyer in a distant village. She is a cold, scornful woman with little patience for her newfound niece, and Sinda proves inept at even the simplest tasks.  But when Sinda discovers that magic runs through her veins - long-suppressed, dangerous magic that she must learn to control - she realizes that she can never learn to be a simple village girl.

Returning to Vivaskari for answers, Sinda finds her purpose as a wizard scribe, rediscovers the boy who saw her all along, and uncovers a secret that could change the course of Thorvaldor's history, forever.

My Review:
Oh, this was a really fantastic book! Loved that while it turns out that she's not the princess, well, she still is important. She's a person, so of course she's important, but there's an extra special importance to her in that she has magic!

It was pretty horrible to find out that she wasn't the princess, that she'd been raised as a decoy, and then kicked out, that's pretty horrible. Not very nice of anybody to do that to her, to not even prepare her for that, was just mean!

The romance and the mystery, and just everything in the plot, I just loved to read about that! Sinda had to find out who she was, now that she wasn't a princess, and that journey was really great to read about!

Oh, that secret that she finds out? Yeah, that's pretty explosive, and it was really great that Sinda was the one that found it, yeah, that was just perfect! And it was great to have Kiernan and Sinda together, they were friends, and then they grew to be more! So good!

So awesome, and amazing, and yeah, I enjoyed it a lot!