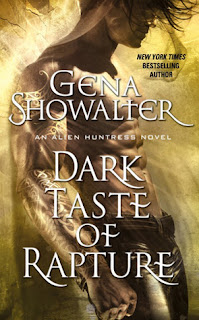 From Goodreads:
New York Times bestselling author Gena Showalter captivates with a dark, tantalizing world of humans, otherworlders, and a powerful AIR agent consumed by his desire for a woman he can never have. . . .

With one caress, he can give unforgettable pleasure . . . or unending pain. . . .

Hector Dean is shaved, tattooed, and totally ripped—and he has a deadly secret. He is a walking weapon, capable of killing with a single brush of his fingertips. Little wonder he’s determined to remain on his own. But Noelle Tremain is a temptation like no other. She is beautiful and rich, with a party girl smile that hides a shocking vulnerability, and from the beginning his sizzling attraction to her is undeniable. For the first time, his stone-cold resistance is tested. But to be with her, he risks destroying her.

When a wealthy businessman is murdered in New Chicago’s seediest district, the two are partnered, and there’s no escaping what they both want: each other. Yet neither Hector nor Noelle knows what to fear more—the killer case, or their own lethal desires. . .

My Review:
Oh, what a wonderful, amazing, fantastic book! So great, and loveable, and utterly readable, entertaining, from Noelle and what she does, and Hector, who wants to protect Noelle from himself, but can't seem to stay away from him!

Starting just under a year before Ecstasy in Darkness, when Noella and Ava just started training to be AIR agents, but after they interact, and he rejects her, it jumps to just before Ava's wedding, which, for Noelle, means loosing the time she used to have with her best friend.

Loved their wedding, Noelle's thought that if he could, McKell would claim all the oxygen as his, because he's so possessive, Noelle and Ava's kiss, Dallas trying to get with Noelle at the wedding, but her trying to set him up with a friend, even though he was using his best moves on her.

I really hope that we get a 7th book soon, preferably Dallas's, to deal with the whole thing on whether or not his vision of Noelle and Hector is Dallas's doom or a good thing for him, and the whole Schon thing and when they come back to Earth, and we got to see Dare in this book, but I want to know more! So I guess Dare could have a book next, then Dallas!

Loved this book, and I really hope for more!