Week 26 Review: What Happened to Goodbye 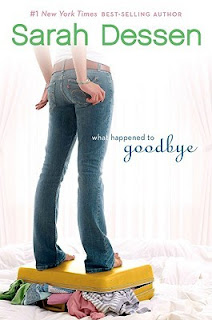 From Goodreads:
Who is the real McLean?

Since her parents' bitter divorce, McLean and her dad, a restaurant consultant, have been on the move-four towns in two years. Estranged from her mother and her mother's new family, McLean has followed her dad in leaving the unhappy past behind. And each new place gives her a chance to try out a new persona: from cheerleader to drama diva. But now, for the first time, McLean discovers a desire to stay in one place and just be herself, whoever that is. Perhaps Dave, the guy next door, can help her find out.

My Review:
This was a pretty great book! I've only read a few Sarah Dessen books, but they've all been wonderful and I've enjoyed them, and this book was no exception! So good, and entertaining, and just a great contemporary book!

I really enjoyed reading about McLean, who's been running from her past since her parents divorced, with her dad, because of his job. And that works for McLean, so she's able to reinvent herself, but to the point where she doesn't really know who she is.

But then in this last move, with everything that's going on, and with Dave, well, this move is different. And it helped her deal with her issues, going as far as visiting her mom's house announced, and the fun times that was!

My only complaint is, that I really thought that the run down hotel was going to be a big plot point. Because when it was mentioned, it seemed like a pretty big thing. But then nothing really amounted of it, and I just wonder about that!

This was a really fantastic book, and I enjoyed it a lot!