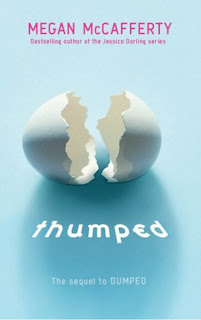 From Goodreads:
THE CONCLUSION TO ONE OF THE MOST TALKED-ABOUT NOVELS OF LAST YEAR

It's been thirty-five weeks since twin sisters Harmony and Melody went their separate ways. And now their story has become irresistible: twins separated at birth, each due to deliver twins…on the same day!

Married to Ram and living in Goodside, Harmony spends her time trying to fit back into the community she once believed in. But she can't forget about Jondoe, the guy she fell for under the strangest of circumstances.

To her adoring fans, Melody has achieved everything: a major contract and a coupling with the hottest bump prospect around. But this image is costing her the one guy she really wants.

The girls' every move is analyzed by millions of fans eagerly counting down to "Double Double Due Date." They're two of the most powerful teen girls on the planet, and they could do only one thing to make them even more famous:

My Review:
Oh, this was a really fantastic book! After Bumped, I was pretty much ready for anything! The beginning threw me for a bit, but yeah, once I got that, and combined that with my knowledge of what happened in the last book, well yeah. So good!

The whole society thing is just kinda crazy. To have that obsession with babies, to continuing the family line, even through some not really moral means, well, yeah. People could and should want babies, but pushing that on teens, and the process of making babies, yeah.

Knowing the truth, and telling the truth, are two different things. So yeah, while this book is pretty short considering others, there is just so much! I just remember the one scene when Melody is at the police station, and she does the thing that lets the rest of the world in on that she isn't pregnant, yeah.

The solution that Melody came up with, that the kids have the babies, and then let their parents raise them, and then repeating the cycle over and over by raising their grandkids once their born, that's the best solution. Because the current system is just a bit off right now!

Really enjoyed this book, it was just fantastic, with a great ending!