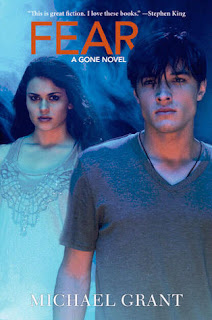 From Goodreads:
It's been one year since all the adults disappeared. Gone.

Despite the hunger and the lies, even despite the plague, the kids of Perdido Beach are determined to survive. Creeping into the tenuous new world they've built, though, is perhaps the worst incarnation yet of the enemy known as the Darkness: fear.

Within the FAYZ, life breaks down while the Darkness takes over, literally—turning the dome-world of the FAYZ entirely black. In darkness, the worst fears of all emerge, and the cruelest of intentions are carried out. But even in their darkest moments, the inhabitants of the FAYZ maintain a will to survive and a desire to take care of the others in their ravaged band that endures, no matter what the cost.

Fear, Michael Grant's fifth book in the bestselling dystopian Gone series, will thrill readers . . . even as it terrifies them.

My Review:
Oh, man, I just loved this book! It's the second last one in the series, which means that a) the series is almost over (which sucks because it's so good!) and b) that it's gearing up for the end, so things are happening, and happening! So awesome!

And they've been changing. Like Sam, the one that pretty much everyone knows is scared of the dark-and now the FAYZ is in a state of permanent darkness. At least for this book! Astrid! Man, she's changed a lot! And all the others! Because we get multiple POV's, which I just love in this series!

Oh, man, that ending? With Diana and Caine's baby being taken over by the gaiaphage, and the dome going clear for the first time, letting the kids see out-and the adults in. Just in time for them to see Sam blast the baby. But oh, well, we know she's evil!

Such a great, awesome book, and man, I just really can't wait for Light, it's going to be a top tier book!