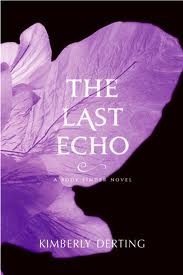 From Goodreads:
In the end, all that's left is an echo...

Violet kept her morbid ability to sense dead bodies a secret from everyone except her family and her childhood-best-friend-turned-boyfriend, Jay Heaton. That is until forensic psychologist Sara Priest discovered Violet's talent and invited her to use her gift to track down murderers. Now, as she works with an eclectic group of individuals—including mysterious and dangerously attractive Rafe—it's Violet's job to help those who have been murdered by bringing their killers to justice. When Violet discovers the body of a college girl killed by "the girlfriend collector" she is determined to solve the case. But now the serial killer is on the lookout for a new "relationship" and Violet may have caught his eye...

My Review:
This was just such a fantastic book! And don't like the title fool you-this isn't the last book in the series, thank goodness! I just enjoy it too much to to be happy with a trilogy, so yeah, having this series longer is just excellent!

I enjoyed this new cast of characters, they were interesting with their own powers, and how those worked, and how they've affected the people's lives, their histories, shaped them, is really interesting! I just wanted to know more!

So we learned a bit about Rafe, and his family, and yeah, that's probably going to be important in the next book, which just another great reason to read the next one! I just can't wait for it, it's going to be very excellent!

The mystery in this book was really excellent and very creepy! So yeah, the way it ended, fitting. But poor Violet, to now have her own echo! And then be threatened so she'll stay on the team! That's not going to end well, I think!

Such a great, enjoyable book, and now I just want the final book!